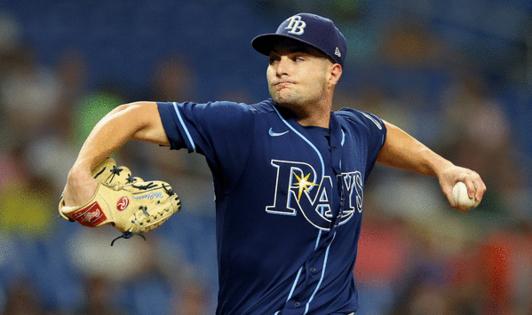 ST. PETERSBURG, Fla. — Time will tell which loss on Tuesday night was greater for the Rays.

Their top starter, Shane McClanahan, leaving the game in the fifth inning after flexing his previously injured left shoulder.

Or their second straight loss to the American League-best Astros, the 5-0 final making for their first back-to-back shutouts in more than five years, and a 20-inning scoreless streak for Tampa Bay’s once productive hitters.

The team said McClanahan’s departure was due to tightness and a spasm on the left side of his neck. He was having a rough outing anyway Tuesday, when he opened the fifth inning with a walk to Jose Altuve, drawing a mound visit from pitching coach Kyle Snyder.

McClanahan then fell behind the next batter, Jeremy Pena. After a 3-0 pitch, manager Kevin Cash and assistant athletic trainer Mike Sandoval came to the mound. After only a brief conversation, Cash indicated that McClanahan was leaving the game. Shawn Armstrong replaced him.

McClanahan had just rejoined the Rays on Thursday in Toronto, making a solid five-inning start after missing 15 days with a left shoulder impingement. That issue surfaced while McClanahan was warming up for an Aug. 30 start in Miami, but was said to be alleviated by a cortisone shot administered two days later.

For the night, McClanahan gave up a season high-matching five runs over four innings, allowing five hits and four walks (including the one to Pena that was completed by Armstrong but charged to McClanahan), throwing only 45 of his 80 pitches for strikes.

The loss dropped the Rays to 82-66, and potentially further behind the wild-card leading Blue Jays and back to third in the three-team field, pending Seattle’s late result.

The Astros, despite a wet-and-wild celebration of the AL West clinching on Monday night, came out swinging and took a first-inning lead as Altuve and Pena singled, and Tampa native Kyle Tucker delivered a one-out double.

They made it 4-0 in the third when McClanahan walked No. 9 hitter Martin Maldonado, then gave up a single to Altuve and a three-run homer to Pena. The fifth run scored after he left, as Altuve came home on a bases-loaded sac fly.

The Rays were no-hit into the fifth, when Christian Bethancourt singled off Cristian Javier with two outs.

But the Rays hitters were mostly shackled by Javier and four relievers, held to three hits before a Tropicana Field gathering of 8,992. The last time the Rays were shut out in back-to-back games was Aug. 11-12 vs. Cleveland.

The 2022 Chicago White Sox had one of baseball’s top starters in Dylan Cease and one of the game’s best relievers in Liam Hendriks. But inconsistency and injuries affected the rotation and bullpen as a whole.

The Chicago White Sox may be turning to a familiar foe to fill an opening in their rotation, reportedly agreeing to a contract with free-agent starter Mike Clevinger.

Financial terms of the deal were not disclosed in the ...Read More