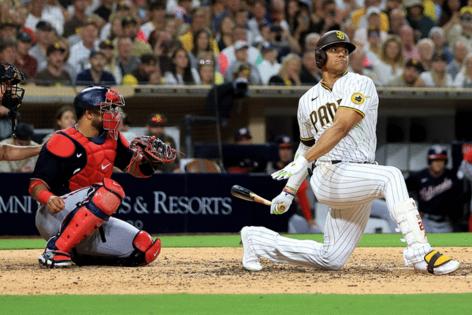 If Anibal Sanchez thought he could sneak a middle-middle sinker past Manny Machado, he was wrong.

Machado always has a green light.

The rest of the team remains stuck in neutral.

Machado’s fourth-inning homer on a three-and-oh swing is all the San Diego Padres had going in a 3-1 loss to the Washington Nationals that saw Yu Darvish walk away empty-handed after 8 1/3 strong innings and new closer Josh Hader continue his wild streak.

Darvish allowed two hits in the ninth inning before Hader hit Luke Voit to load the bases, walked Nelson Cruz on four pitches and gave up a sacrifice fly before getting out of the inning.

It was Hader’s first appearance since Aug. 9, when he allowed three runs on a hit, three walks and a hit batter.

But the Padres managed just three hits — and just the one off Sanchez (5 IP, 1 ER) — went 0-for-4 with runners in scoring position and saw even their new toy, Juan Soto, strike out with the bases loaded to end the seventh.

The home run that Sanchez allowed to Machado was a 111-mph drive that extended his hitting streak to 10 games, a run that includes three home runs, seven doubles and 14 RBIs.

Soto’s sixth-inning walk off left-hander Jake McGee extended his on-base streak to 23 games and upped his MLB-leading total to 106. After former teammate Victor Arano struck out him out to end the seventh, Soto slammed his helmet and bat down at the plate.

Before the ninth, Darvish’s only hits allowed were to third baseman Ildemaro Vargas, among the reinforcements to make their way to Washington in the days following the trade that sent Soto and Josh Bell to the Padres.

The first was a solo homer to right to give the Nationals 1-0 lead in the third.

The other was a single that Darvish stranded in the sixth as he looked to improve upon the six innings of one-run ball that he threw in Washington last week, the Padres’ only loss in that three-game series.

Nevertheless, the Padres are 3-4 in the last week against the NL East’s fourth- and fifth-place teams.

PITTSBURGH — Prior to Wednesday’s season finale, which turned out to be a 5-3 win over the St. Louis Cardinals, Pirates manager Derek Shelton admitted that he gets frustrated too, sometimes.

Much of that pregame ...Read More

The Twins designated hitter walked twice and doubled before leaving in the third inning as the Twins stomped the Chicago White ...Read More

LOS ANGELES — The 2022 season began with hyperbole about the Dodgers fielding one of the best teams ever.

Six months later, It ended with them having done just that.

OAKLAND, Calif. — Stephen Vogt turned on a 94-mph fastball from Zack Weiss and watched it sail into the right-field seats. Vogt rounded first base — high-stepping along the way — with a hysterical Coliseum crowd ...Read More

Absent a pennant race, a division sprint or wild card wackiness, the Giants wrapped their slog to the finish line of a disappointing season on a bright note Wednesday, in an 8-1 win over the San Diego Padres.

HOUSTON — The Phillies barely had anything to play for on Tuesday, and after it became official that they would face the Cardinals on Friday in an NL wild-card series, they had even less to play for in Game 162 on ...Read More