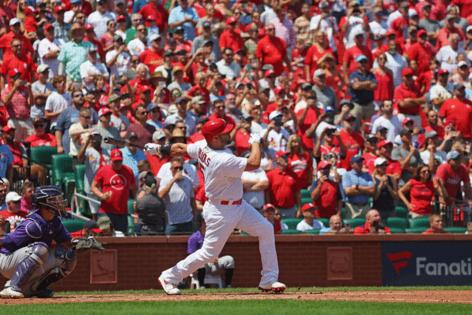 “Yeah, I’ve been hearing one more year,” Pujols said. “Sure, I’ll be here one more year. I’m going to come and see Yadi and Waino pitch and yell something like, ‘Why didn’t you guys retire?’ Yeah. I’ll definitely be here, for sure. Watching these guys. From the stands. For sure.”

So, that means Molina is coming back?

“Maybe,” Pujols joked. “I don’t know. You didn’t see him throwing that throw to second?”

Said Molina, with a healthy dose of sarcasm: “Yeah, right.”

“It’s just fun,” Pujols said. “We are having fun. This is what we want, our last year, Yadi and myself. We just want to enjoy and embrace everything. I told you guys in spring training. I’m going to continue to tell you guys until my last game. This is awesome. It’s a blessing to be back here and just contributing to this organization. This year.”

Now, could Pujols change this stance? I suppose. And if he does, that would be great news for both the Cardinals and their fans.

If he doesn’t? What a one-year return this has become. What a final chapter is being written, with postseason pages left to spare. The newest addition came here Thursday, when Pujols turned a six-run Cardinals advantage against the Rockies into a Colorado avalanche by hopping off the bench in the third inning and hitting a pinch-hit grand slam. Four grown men in the left-field seats swarmed upon the ball like it was a bar of gold. Starter Adam Wainwright, who was once again terrific, experienced flashbacks to Pujols' 11 seasons here before his free-agent departure to Anaheim. He used to attempt to explain what that was like to younger teammates. Now they see.