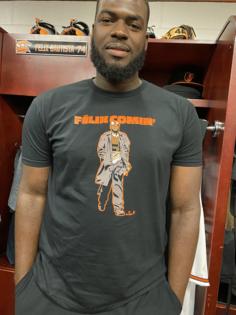 BALTIMORE — Félix Bautista doesn’t really understand the reference. He’s never seen “The Wire” on HBO. But the Orioles closer still wore the T-shirt with his own face photoshopped where the face of Omar Little should be.

The Orioles love their T-shirts, and the latest addition was seen Thursday in the clubhouse with most of Bautista’s teammates wearing a shirt that reads “Félix Comin’,” referencing the phrase used in the show to signal that Little, the beloved stickup man played by the late Michael K. Williams, was on his way to the neighborhood.

The connection took off earlier this month when the Orioles began to play the iconic whistling of “The Farmer in the Dell” from Little on “The Wire” before Bautista entered for a save situation. The stadium lights flashed at Camden Yards, too.

“The Wire” is set in Baltimore and was created by former Baltimore Sun reporter David Simon, and the whistling, a distinctly Baltimore tune, has been used before by the Ravens. Last year, less than two weeks after Williams died of an accidental drug overdose at 54, the Ravens played the whistling before kickoff against the Kansas City Chiefs on “Sunday Night Football” in September.

It’s not the first unique T-shirt to appear in the Orioles’ clubhouse. Earlier this month, they unveiled a “Robbie’s Playlist” shirt that featured all of catcher Robinson Chirinos’ favorite sayings. Several of the starting pitchers, including Tyler Wells, wore “Best dad ever” shirts with Jordan Lyles’ face on it for Father’s Day.

“It’s a light environment,” right-hander Joey Krehbiel said. “There’s no eggshells to be walking on. There’s guys with a lot of big league time. There’s guys that have five days of service time and everyone gets treated the same and we’re a winning environment, and we’re trying to keep that on the shirts, just any little thing like that helps.”

“Félix Comin’” is the latest addition, and fans can purchase it from BreakingT.