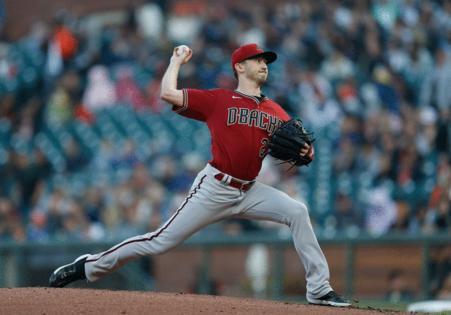 SAN FRANCISCO — The Giants came into Wednesday’s game riding a five-game win streak with their starting rotation turned to its ace, who gave them their best shot until the Arizona Diamondbacks put together a comeback against the bullpen. The Giants lost 3-2.

The Giants carried a 2-1 lead heading into the eighth inning. Dominic Leone gave up a go-ahead two-run RBI single to Jake McCarthy and the Giants combined base-running blunders with lackluster at-bats meant a comeback of their own wasn’t in the cards.

His 11th, and final strikeout of the game was his most important with the game tied 1-1: after loading the bases with a walk, catcher’s interference, and hit batsman, Rodón struck out Jordan Luplow swinging on a slider to the roar of a small Oracle Park crowd. Rodón got the Diamondbacks to swing-and-miss on 11 four-seam fastball pitches.

Rodón exited having given up one run on an RBI double from Stone Garrett on his first MLB hit, one of two hits he would allow. It erased an early lead earned on Wilmer Flores’ solo home run in the fourth inning.

J.D. Davis took that lead back with a solo home run after Rodón’s departure. With a few opportunities to extend the lead squandered — they went 0-for-7 with runners in scoring position — a slip-up in the eighth was enough to bury Rodóns impressive performance.