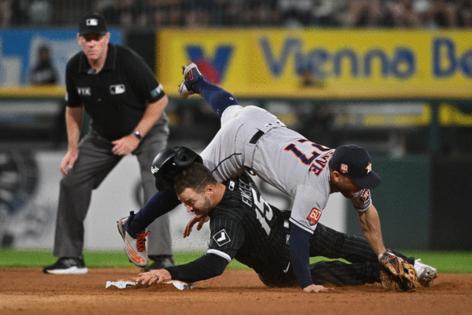 Romy Gonzalez hit a grounder to shortstop Jeremy Peña, and the Astros got a forceout at second. AJ Pollock’s hard-hit grounder up the middle turned into an eye-opening, inning-ending double play started by second baseman Jose Altuve.

“(We) got up in the late innings there with opportunities again,” Engel said. “Law of averages says you’re not going to capitalize every single time, but it felt like we were.”

The Sox saw their winning streak end at five and fell two games behind the Cleveland Guardians in the American League Central.

The Sox scored four runs in the eighth inning Monday to beat the Astros 4-2. They scored twice in the seventh and once in the eighth Tuesday, rallying for a 4-3 victory.

Yoán Moncada provided the go-ahead hit in both of those games. He found himself in another big spot Wednesday.

Eloy Jiménez walked with one out in the eighth. He was lifted for pinch runner Luis Robert. José Abreu singled off the glove of a diving Peña.