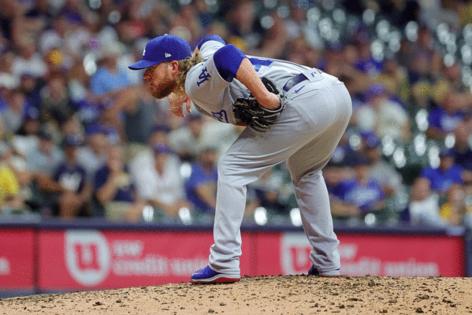 “If we have a one-run lead tonight, he’s pitching,” Roberts said.

The baseball gods heard and must have said, “Hold my beer.”

Kimbrel entered the game in the ninth inning and put the tying and winning runs on base before closing it out, protecting a one-run lead for the first time this season (after blowing his previous four save chances in those situations) as the Dodgers beat the Milwaukee Brewers, 2-1.

The Dodgers’ pitching staff has given you so much to worry about – Clayton Kershaw’s back, Walker Buehler’s elbow, Andrew Heaney’s shoulder, an assortment of injured relievers and, at the back end, Kimbrel’s difficulties.

Before the game rested in Kimbrel’s hands, Tony Gonsolin held the Milwaukee Brewers to two hits over seven innings in the latest night’s work from baseball’s best run preventers. Wednesday was the 37th time the Dodgers have allowed one run or no runs in a game (including 10 shutouts, three this month).

The staff ERA of 2.85 leads the majors. No other team is under 3.00. The revolving group of starters – anchored by the trio of Gonsolin, Tyler Anderson and Julio Urias – has an even wider margin over their peers. Their collective ERA of 2.71 after Wednesday’s game is almost a half-run lower than any other team.

Gonsolin retired the first 10 Brewers in order, walked a batter, erased him in a double play and didn’t give up a hit until the sixth inning. Singles by Keston Hiura in the sixth and Mario Feliciano in the seventh were all the Brewers managed against Gonsolin who seems to be catching a second wind in August. In three starts this month, he has allowed just one run on seven hits in 18⅔ innings.

Caleb Ferguson gave up the Brewers’ only run of the night when he walked back-to-back hitters with two outs in the eighth inning then gave up an RBI single to Christian Yelich.

For Barnes, the homer was his first since May 21. The Dodgers’ backup catcher had four home runs in his first 45 at-bats this season but none over his next 74 at-bats before Wednesday.