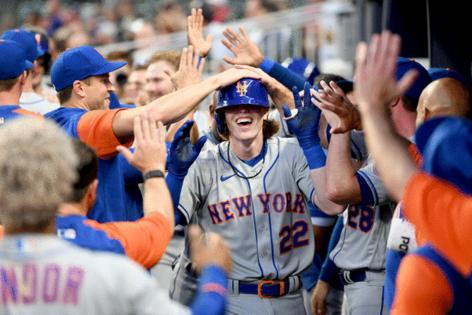 The 22-year-old, wearing a jersey number that matches his age, stood in a small room in the lower level of Truist Park on Wednesday and explained everything that’s happened to him over the last 24 hours.

“I got the call yesterday, got on a flight and got here last night,” Baty said. “I’m just super excited to get out there and start playing.”

He mentioned that the original plan was to have him join the Mets on Tuesday, but air travel has a way of ruining plans.

“I didn’t make the first flight, so here I am today.”

It didn’t take long for the kid to make an impact. In his first MLB at-bat, he turned a Jake Odorizzi curveball into a line drive home run. By going yard on the second pitch of his career, Baty became the fifth player in Mets history to hit a home run in their first at-bat. The 377-foot blast into right field put the Mets ahead 4-0 in the second inning and sent the dugout, as well as his family, into absolute hysterics.

Baty said that not putting any big expectations on himself will be key. He also said, very diplomatically if not entirely truthfully, that getting called up to the big leagues wasn’t on his mind at all. In a very polished answer far beyond his years, he told reporters that winning games for the Triple-A Syracuse Mets was his main focus until getting the MLB promotion.

For the first game of Baty’s career, he batted eighth and played third base behind Max Scherzer. There are very few debut scenarios that could be more intense than a Mets-Braves series with the two division rivals separated by 3.5 games, but the injuries the Mets have suffered over the past week didn’t afford them the opportunity to shield Baty from the spotlight.

“It’s what every kid dreams of, for sure,” Baty said. “To make my debut against the Atlanta Braves, playing for the New York Mets, is truly a dream come true.”

As a minor leaguer for both Double-A Binghamton and Triple-A Syracuse, Baty was still able to keep one eye on the big league club. According to him, though, his mind didn’t immediately think he was next in line after Eduardo Escobar and Luis Guillorme went down.

“I saw the injuries, but I wasn’t really paying attention to that,” Baty said. “I was just going out there every single night and trying to get better at baseball.”

The youngster from Austin, Texas, said the best advice he’s gotten was from a hitting coach who reminded him that the game is the same in the big leagues as it is everywhere else. He also got some encouragement from the Mets’ center fielder.

“As I was coming in here, [Brandon] Nimmo took me aside and was like, ‘Hey man, slow it down. It’s going to be a pretty big atmosphere, for sure. But we all trust you out there. We have your back,’ ” Baty said. “That’s what I wanted to hear.”

Mets manager Buck Showalter praised Baty for being receptive to instruction and said that he kept things pretty low key with the third-base prospect before the game as to not overload him with information.

“He’s a big boy,” Showalter said. “He understands what’s ahead of him.”