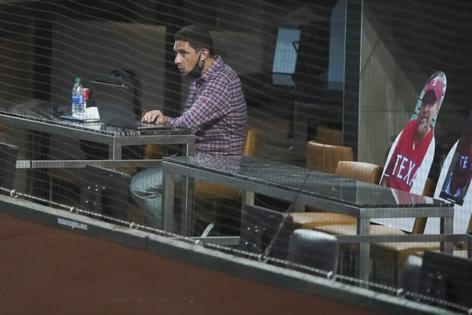 Daniels, who has been with the team since 2002, spent the past 17 years running the baseball operations, including as general manager in 2005 and team president in 2013.

General manager Chris Young, who was hired nearly two years ago, “will assume oversight of all aspects of the Rangers’ baseball operations department,” according to a Rangers press release.

Young was hired in December 2020 to work with Daniels and has been involved in all areas of the department since that time.

“This morning I informed Jon Daniels that his contract would not be renewed at the end of the season and that he is being relieved of his duties effective immediately,” Rangers majority owner Ray Davis said.

Daniels front office helped build the organizations best teams in their 50 years in Arlington, including two World Series Appearances in 2010 and 2011.

“His impact on the growth of our player development, scouting, and analytics groups has been immense,” Davis said. “Jon has always had the best interests of the Rangers organization in mind on and off the field and in the community.

“But the bottom line is we have not had a winning record since 2016 and for much of that time, have not been competitive in the A.L. West Division. While I am certain we are heading in the right direction, I feel a change in the leadership of the baseball operations department will be beneficial going forward,” Davis added.

Davis praised Young, a former MLB pitcher who grew up in Highland Park, in the release, calling him “one of the top young baseball executives in the business.”

“[He] has brought welcome energy and new ideas to the organization. I am confident in Chris’ ability to lead our baseball operations with the goal of producing a consistent winner on the field,” he said. “I want to thank Jon for being a great partner for this ownership group over the last 12 years, and I wish him and his family the best for the future.”

Daniels joined the Texas baseball operations department in 2002 and was appointed as the Rangers’ eighth general manager on October 4, 2005. He was promoted to President of Baseball Operations in March 2013.