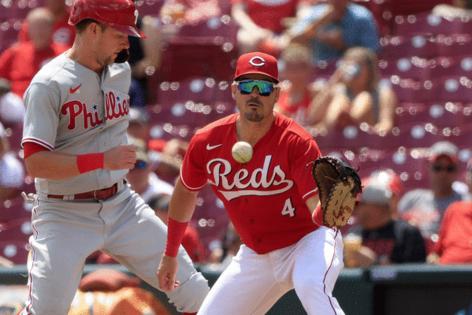 CINCINNATI — Over the last four months, Seranthony Domínguez has reestablished himself as one of the best relievers in baseball.

On Wednesday, he offered a reminder that he’s human.

Domínguez issued a rare four-pitch walk, then gave up back-to-back two-out singles in the ninth inning as the Phillies were walked off, 1-0, by the Cincinnati Reds in the finale of a three-game series.

The Phillies had an opportunity for a sweep. But they were muted for seven innings by Reds rookie left-hander Nick Lodolo, who dueled with Phillies starter Ranger Suárez, and reliever Alexis Diaz for two more.

Domínguez, who entered with a 1.45 ERA in 45 appearances after missing all but one game of the last two seasons while recovering from Tommy John elbow surgery, hadn’t allowed a run since July 10.

But Domínguez walked Albert Almora Jr. on four pitches. He gave up a single through the left side of the infield to Alejo López before Jose Barrero stroked a single to center field that scored Almora from second base.

Despite the loss, the Phillies will hold possession of the second wild card in the National League, one game ahead of the San Diego Padres. After a day off Thursday, the Phillies will return to Citizens Bank Park on Friday night to open a four-game, three-day series against the New York Mets.

Suárez made it 3 for 3 in quality starts for the back of the rotation against the Reds.

NEW YORK — The Yankees locked up the playoffs a while ago. They are locked into the second seed in the American League and the first-round bye that comes with it. They can’t overtake the Astros for home-field advantage...Read More