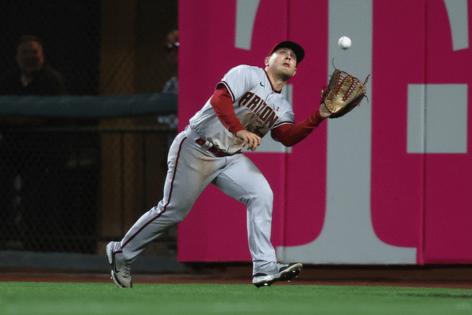 SAN FRANCISCO — In a positive development for the Giants postseason hopes, Jakob Junis returned to form Tuesday night against the Diamondbacks. A not-so-good development saw the Giants fail to crack their Kryptonite this season that has taken the form of Arizona right-hander Merrill Kelly.

The best development, though, waited until the end.

After being blanked for eight innings and two outs into the ninth, Brandon Crawford sent a walk-off home run over the center field wall to beat the D-backs, 2-1, and extend their winning streak to five games.

The Giants were down to their final strike against Arizona closer Ian Kennedy, but Thairo Estrada extended the game by tripling off the arcade in right field — nearly reprising his role as Sunday’s walk-off hero — to set up Crawford’s walk-off shot.

The Giants, who were without a walk-off home run since 2019, have hit three in the past month, including two in the past three days. Crawford’s homer — his first since June 3 — followed Estrada’s walk-off shot to beat the Pirates on Sunday.

With San Diego’s loss in Miami, the Giants picked up a game in the wild card race but remain 4.5 games out of playoff position with 46 to play.

In his best start since returning from a strained hamstring, Junis limited Arizona to one run over seven innings.

Junis pumped his fist as Seth Beer swung through a 1-2 changeup for the final out of the seventh inning.

The pitch was the 101st and final Junis threw in his longest outing in a San Francisco uniform, the 16th swing-and-miss he generated and finished off his seventh strikeout victim.