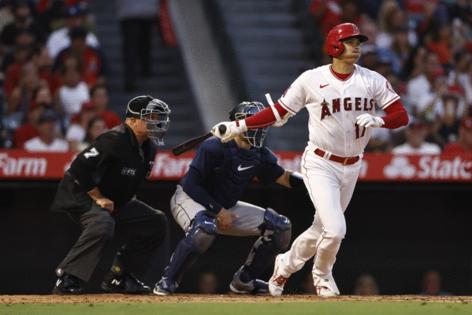 ANAHEIM, Calif. — Instead of forcing the Angels into another ninth-inning implosion of mistakes, this time the Mariners turned the ninth inning into an explosion of their own hits and runs.

And as the Angels fans, at least the ones that decided to stay after Seattle scored five runs in the top of the ninth inning, vented their anger at the opposing players and their frustrations with their own hapless team, the Mariners basked in their best offensive showing of the road trip — an eventual 8-2 drubbing of their American League West rivals.

Adam Frazier’s two-run triple and Julio Rodriguez’s line drive of a two-run homer to right field highlighted the explosion of runs off veteran reliever Jesse Chavez in the top of the ninth inning, turning a one-run lead into a rout.

With the victory, the Mariners guaranteed a series win and will go for a three-game sweep of the Angels on Wednesday afternoon.

Seattle returned to 10 games over .500 at 64-54 and into a tie for the first American League wild-card spot with the Tampa Bay Rays.

The eight runs is the most the Mariners have scored since their July 4 victory over the Padres that was also 8-2.

For the first five innings scoring a run or even getting a runner on base was an impossibility.

For the those first five innings, Jose Suarez was perfect. Using an assortment of sliders and change-ups, the stocky left-hander retired the first 15 Mariners he faced. The Mariners didn’t have much in the way of hard-hit balls in that stretch.

But after Suarez retired Curt Casali on a pop-up, Frazier ended his hopes of history with an infield single deep in the hole to shortstop.

With one out of the way, the Mariners added three more in a row. Sam Haggerty slashed a line drive into left field and Rodriguez, who was hitless in his previous 16 at-bats, dumped a single into left-center to load the bases.

The fourth consecutive single of the inning belonged to Ty France, who was 1 for 19 on the road trip. France laced a 3-2 fastball from Suarez past first baseman Jared Walsh for a single that scored a pair of runs to tie the game. Jesse Winker followed with a fly ball to right field that was deep enough to allow Rodriguez to tag up and race home for the go-ahead run.

Seattle got a quality start from lefty Robbie Ray, who wasn’t always efficient in his six innings of work, allowing two runs on six hits with two walks and 10 strikeouts. He allowed a solo home run to Luis Rengifo in the first inning and an RBI single to Rengifo in the third inning.

But Ray didn’t allow another run the rest of the way. And given a lead in the bottom of the sixth, Ray worked around a leadoff single from Taylor Ward and error from Winker that allowed him to advance to second on the play. He came back to strike out Max Stassi and Jared Walsh and end his outing on a weak ground out to short from Magnerius Sierra.