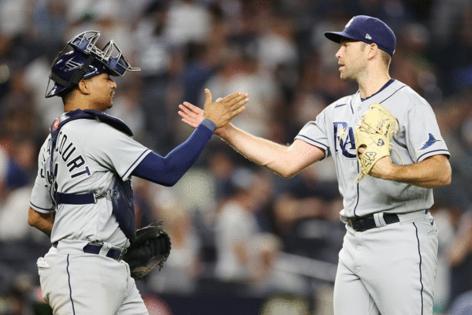 NEW YORK — Ever since the Yankees roared off to their record-threatening start, winning 52 of their first 70 games, the American League East division race was considered all but over.

But here’s a question:

Is that now in question?

The Rays beat the Yankees again Tuesday, this time 3-1.

The victory extended the latest run for the Rays, who have won four straight and eight of 12. And it continued the Yankees’ ongoing slide, as they have lost 11 of their last 13 and gone 20-27 since that outstanding start.

It’s one the Rays have overcome before. In 2011, they were nine games out of a playoff spot on Sept. 3 and came back to win a wild-card berth.

The Rays were buoyed entering Monday’s game by the sooner-than-expected return of Harold Ramirez. He was summoned to join the team after playing just one rehab game with Triple-A Durham after sustaining a broken right thumb on July 17.

They grabbed the early momentum with a three-run homer by Randy Arozarena in the first inning.

Yandy Diaz singled on Nestor Cortes’ second pitch of the game, and Isaac Paredes did the same after fouling off four pitches. After Ramirez flied out to left field, Arozarena jumped on a 1-1 fastball and drove it 389 feet with an exit velocity of 105.2 mph. It was Arozarena’s second three-run homer in three games, his fourth homer in his last six and his 16th of the season, extending his team lead.

Jeffrey Springs made it stand up with a strong five-inning outing. He allowed only one hit through the first four innings, a two-out single in the second by Andrew Benintendi.

The Yankees got a run in the fifth, though it really wasn’t Springs’ fault. Benintendi drove a ball to right-center that center fielder Jose Siri didn’t pursue well (and then jumped before getting to the wall) and turned it into a triple.

Then the Rays got sloppier, as third baseman Diaz gloved Miguel Andujar’s hard grounder but lost control of it as he tried to make a throw.

The Rays went with their bullpen brigade after Springs’ departure. Pete Fairbanks, hitting the 100 mph mark, blew through the sixth. Brooks Raley started the seventh, then Shawn Armstrong finished and got the first two outs of the eighth before allowing a single. Jason Adam took over from there and retired Aaron Judge to end the eighth before setting the Yankees down in order in the ninth.