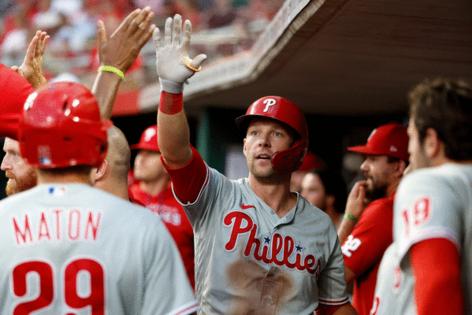 More than 15 years after the Phillies earned the dubious distinction of becoming the first franchise in Major League Baseball history to lose 10,000 games, the team has finally joined baseball’s 10,000-win club.

Thanks to their 11-4 victory over the Cincinnati Reds on Tuesday night, the Phillies became just the ninth MLB team to win 10,000 games. The others are the Giants, Dodgers, Cubs, Cardinals, Braves, Reds, Pirates, and Yankees.

Considering the organization has been around since the days following Reconstruction, it certainly took them long enough. How long? 21,278 games to be exact.

But this achievement isn’t really a cause for celebration.

Of all the teams to reach this milestone, it took the Phillies the longest, which shouldn’t come as a surprise given they were the first to 10,000 losses and have the fourth-worst winning percentage of any current franchise (.472) They were also the last team founded before 1900 to win 10,000 games.

And it doesn’t stop there for the Phillies, whose ineptitude has carried over into the postseason as well.

Of the nine teams on this list, none has fewer playoff appearances or World Series titles than the Phillies, who have been to the postseason just 14 times in their 140-year history and haven’t made it in the last decade. Their last postseason appearance ended with Ryan Howard clutching his Achilles tendon along the first-base line in 2011. The Phillies have only two World Series titles, winning the first in 1980 and again in 2008.

Some of the Phillies’ struggles — at least compared to the other teams on this list — could be because of a lack of talent. While the Phillies have had their share of legendary players over the years, they’re tied for fewest Hall of Famers among their peers on this list.

If all goes as planned, the Phillies will be adding a few more wins to this list in 2022 as they look to finally snap their 10-year playoff drought.