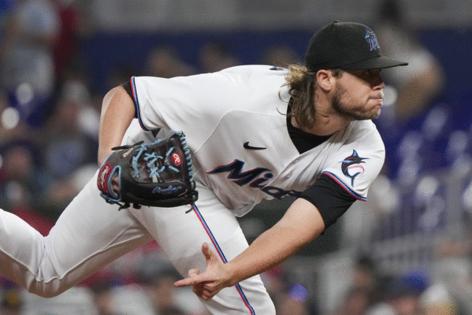 MIAMI — The Padres say this is different.

Curiously, what is happening on the field is disappointingly familiar.

It’s August, and the Padres are scuffling. It’s crunch time, and they are getting crunched.

It’s usually their offense that lets them down. It is occasionally their pitching. Sometimes it is a bit of both.

Tuesday, it was that.

And the resulting 4-3 loss to the Marlins was their third defeat in five games on a trip in which they first visited Washington, where they won a somewhat disappointing two of three against the worst team in the major leagues.

The Marlins, who were 15 games below .500 before beating the Padres the past two days, have better pitchers than the Nationals. But the Marlins’ offense is enduring a two-week stretch of futility unseen in the major leagues in more than four decades.

A night after being shut out for the third time in eight games, the Padres scored Tuesday. Just not enough.

For the first time in 17 games, the Marlins managed more than three runs in a game. That ended the longest such streak in the major leagues since 1979.

ANAHEIM, Calif. — It requires a good deal of optimism to think that the entirely homegrown lineup the Angels used on Friday night has the same future as the one they last used 23 years ago.

If nothing else, this group ...Read More

SEATTLE — After 21 long years of frustration and failures, of close calls and coming up just short, of spring trainings filled with hope and offseasons spent with regret, of entire careers without champagne celebration ...Read More