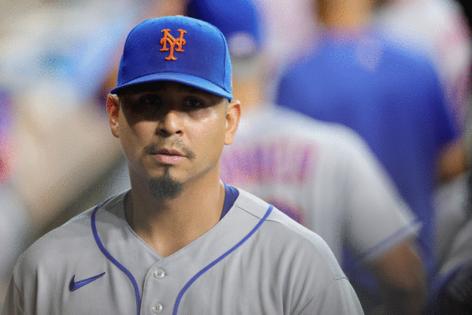 NEW YORK — Mets starter Carlos Carrasco was placed on the 15-day IL due to a low-grade strain in his left oblique. The Mets estimate his recovery timetable to be about three to four weeks.

“Carlos got the test back, it’s actually pretty good news,” Buck Showalter offered optimistically. “Grade 1 (strain), that’s good news. We thought it could have been something a little deeper. We hope it’s not as long as some of those things take, we’ll see.”

Carrasco left Monday’s game after two innings, which were interrupted by a rain delay. On his way into the tunnel after the second, he could be seen grabbing at his oblique.

“I actually look at it as, maybe, an opportunity to freshen him up arm-wise,” Showalter said. “I think he’s exceeded the things that we thought he might do.”

Stephen Nogosek was brought up from Syracuse to replace Carrasco. Nogosek has pitched in nine games for the Mets this season with a 2.30 ERA. Additionally, the Mets made a right-handed reliever swap. Adonis Medina was optioned to Triple-A while R.J. Alvarez was called up. Alvarez last pitched in the big leagues in 2015 with Oakland. He posted a 3.38 ERA and 22.3% strikeout rate in 29 games for Syracuse this year, all of which were out of the bullpen.

In the final roster move of the day, outfielder Nick Plummer was designated for assignment.