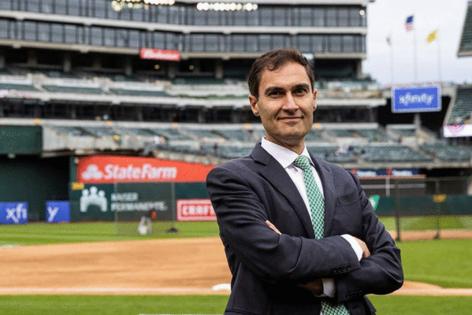 The meeting is the second to occur this month, with Ruffin previously making a trip on August 2 to Oakland regarding the 37-acre Las Vegas Festival Ground site he owns, located on the southwest corner of Las Vegas Boulevard and Sahara Avenue.

After showing interest in the site last year, early in the A’s Las Vegas Valley ballpark land search, talks quieted about the site. The early August meeting between the A’s and Ruffin signaled that the site had reemerged as a “dark-horse contender,” a source indicated.

Despite the recent activity between the A’s and Ruffin, the Tropicana site remains in contention, sources confirmed. Ruffin has ownership of multiple properties in Las Vegas, including Circus Circus and Treasure Island.

The A’s have been exploring the Southern Nevada market since May 2021. In that time they have chopped a list of more than 20 ballpark sites down to two.

Last week Ruffin’s spokeswoman said he was unavailable for comment regarding the A’s situation.

The A’s are also still negotiating a deal in Oakland regarding a $12 billion mixed-use stadium project at Howard Terminal. That includes a $1 billion waterfront stadium.

A year after the Oakland City Council approved its version of a term sheet for the planned project, one the A’s disapproved of, the two sides have been negotiating their differences.

The main differences are about community benefits, affordable housing and off-site infrastructure plans.

The affordable housing and community benefits issues are nearing a resolution, but the financial terms regarding the proposed off-site infrastructure remain unresolved.

Major League Baseball gave the A’s the green light to research relocation last year after talks in the Bay Area stretched out, noting their current home, RingCentral Coliseum, is not a viable facility for the future of the franchise.

The Oakland City Council hasn’t discussed the topic since going on summer recess last month. Before that occurred, the council shot down a proposal to include the Howard Terminal issue on November’s ballot. The move was seen as a positive step toward the As’s remaining in the Bay Area.

The city council has a tentative date of Sept. 20 to review a financial analysis for the project, according to city spokesman Justin Berton. “Since there is no proposal to analyze, that may be a hold date,” Berton said in an email.