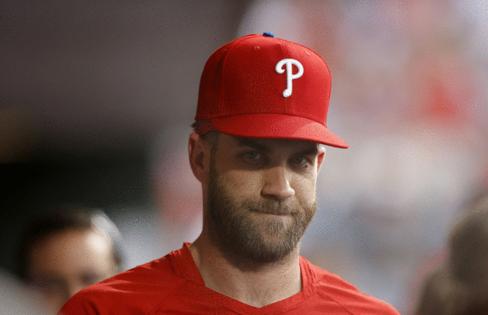 Thomson called it a “huge” step for Harper, who has been on the injured list since June 26. If Monday’s batting practice goes well, the Phillies will simulate velocity for Harper in the batting cage using high-speed pitching machines. If that goes well, he’ll start a rehab assignment with one of the Phillies’ advanced-level minor league affiliates.

The Phillies aren’t sure when Harper will be able to rejoin the team, but they are optimistic it’ll be sooner rather than later.

“It’s getting there,” Thomson said. “He’s making progress. It’s good. And like I said, if everything goes well today, he’ll be on the field tomorrow, taking BP.”

Before he got hurt, Harper was the Phillies’ hottest hitter. Over 64 games, he batted .318/.385/.599 at the DH spot (Harper was diagnosed with a small tear in his right ulnar collateral ligament in mid-May and has been unable to play right field since then).

Schwarber out of the lineup again

For the third straight day, Kyle Schwarber was out of the Phillies starting lineup as he recovers from a mild right calf strain. Schwarber pinch-hit for Matt Vierling on Saturday night, and could be available to pinch-hit again on Sunday afternoon. Thomson still doesn’t think that Schwarber will require an injured list stint.

“(He feels) the same as yesterday,” Thomson said. “He’ll be available to pinch hit. He’s going to run a little bit more today. I don’t know when he’ll be back to DH role or outfield role yet but at least he can give us one at-bat.”

Could we see Bryson Stott at leadoff? Maybe

Rookie shortstop Bryson Stott only has two games worth of experience batting leadoff, but he has made the most of them. Against two of the best pitchers in baseball — Max Scherzer and Jacob deGrom — Stott has gone 4-for-8. He was one of only two Phillies hitters to get a hit off of deGrom on Saturday night.

“The at-bats, the defense, can’t say enough about him,” Thomson said. “He’s really played well. And with not much of a heartbeat. He’s really calm, really poised, he’s played really well.”

Thomson said they’ll have to have “discussions” about where Stott will hit moving forward, but wouldn’t rule out the possibility of it being in the leadoff spot.

Schwarber has batted leadoff 79 times this season, and likes batting there, which will have to be a consideration.

“I think guys should hit where they feel comfortable, if that’s the right spot,” Thomson said. “If a guy is a nine hole hitter and he says he feels more comfortable in the three spot, I’m probably not going to put him there, you know what I mean.”

Bailey Falter was with the Phillies in New York on Sunday afternoon. He’ll start one of the doubleheader games against the Mets in Philadelphia on Saturday, and throw a simulated game in Cincinnati on Monday. Falter will be on the taxi squad.