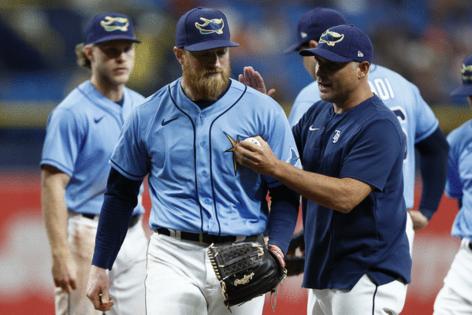 ST. PETERSBURG, Fla. — The anticipation of the moment grew around Tropicana Field. As Drew Rasmussen trotted to the mound for the ninth inning, Tampa Bay Rays fans rose to their feet, cell phones in hand, waiting to document history.

But Orioles shortstop Jorge Mateo had other ideas. On the first pitch he saw from Rasmussen — a cutter left over the plate — Mateo turned his hips and ripped the ball down the left field line for a double. When he reached second base, the Orioles dugout applauded Mateo’s efforts, breaking up a perfect game with just three outs remaining.

The groans from the crowd led to an ovation. It ended after 24 batters — 24 batters who came and went without much of a threat — and Rasmussen still set up the Rays for a 4-1 victory. But there was also a so-close, so-far aspect, as it became the second time Tampa Bay has taken a perfect game bid into the ninth inning before it was broken up. The last time, July 14, 2019, was a combined effort. And that one, too, was foiled by the Orioles, who have never been involved in a perfect game.

“It was definitely a relief,” Mateo said through team interpreter Brandon Quinones. “No team wants to have that on them and be the team that got a perfect game against them. It was definitely nice to get that hit in the last inning. We’ve been playing well; hopefully we can keep it going soon.”

Former Seattle Mariners ace Félix Hernández is the most recent pitcher to reach perfection. The 10-year anniversary of the 21st perfect game in MLB history is Monday.

Soon after Mateo’s double, Rasmussen’s shutout evaporated, with Mateo scoring on a wild pitch. Rays manager Kevin Cash walked to the mound to replace a pitcher that had flirted with perfection and — as so frequently is the case — came up just shy. Rasmussen was still showered by cheers upon his departure.

Rasmussen finished his day with one run against him through 8 1/3 innings, allowing one hit and no walks while striking out seven batters on 87 pitches.

“A lot of early count, weak outs,” manager Brandon Hyde said. “That helped him out. But he threw a heck of a game.”

In his last outing, Rasmussen was held to just three innings, part of a workload management system for a 27-year-old pitcher who has already undergone two Tommy John surgeries in his career.

During Rasmussen’s on-field postgame interview, he remarked how his command was so shaky before his start that one of his long toss attempts sailed over his target, over the net and hit a fan in the stands. That fan went home with a Rays jersey, and Rasmussen rebounded for the best start of his career.