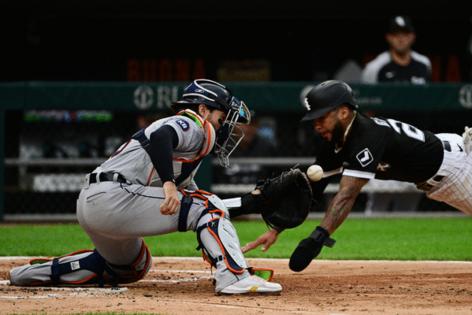 CHICAGO — Riley Greene talked before Saturday's game about getting back to his smooth, natural swing. He felt like he’d been trying to do too much, getting outside of himself, not letting the game just come to him.

Well, it came to him in the second inning against Chicago White Sox starter Lucas Giolito.

With the bases loaded and two outs, he stayed back on a first-pitch change-up and drove it to the base of the wall in left-center. All three runs scored on his double and, after the Tigers were shut out for the 16th time this season on Friday, it felt like the damn might’ve broke.

The Tigers mustered just one more run and the White Sox stormed back to take a 6-4 win at Guaranteed Rate Field.

The pivotal play came in the bottom of the seventh. With the score tied 4-4, Jose Abreu legged out an infield single with one out against reliever Joe Jimenez. Yasmani Grandal followed with a 399-foot fly ball to center that Greene caught at the wall.

Abreu tagged and went to second. Greene made a strong throw right on the bag and shortstop Javier Báez applied a swift tag. At least he thought he did. Second base umpire and crew chief Jerry Layne called Abreu safe and a video review upheld the call.

Andrew Vaughn cashed it in, slapping a single to center, scoring Abreu with the go-ahead run.

Tigers’ manager AJ Hinch came out to make a pitching change and then made a beeline to Layne. Arguing video replay decisions brings an automatic ejection. Hinch knew that and didn’t care. He made sure to get his point across.

The Tigers must’ve had a replay angle that showed Báez apply the tag.

NEW YORK — The Yankees locked up the playoffs a while ago. They are locked into the second seed in the American League and the first-round bye that comes with it. They can’t overtake the Astros for home-field advantage...Read More