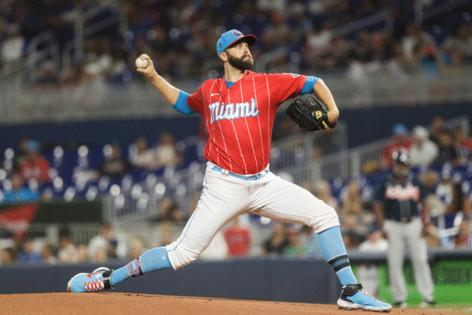 MIAMI — The Miami Marlins lost both games of their doubleheader against the Atlanta Braves on Saturday at loanDepot park, falling 5-2 in the first game and 6-2 in the nightcap.

With that, Miami’s scoring woes have reached a point not seen in more than 40 years.

The Marlins (50-64) have scored three runs or fewer in 14 consecutive games, the longest streak in MLB since the Chicago Cubs went 15 games without scoring at least four runs from Sept. 11-24, 1979. The last time Miami scored at least four runs in a game was July 29 in a loss to the New York Mets.

For those curious, the MLB record for the longest run of consecutive games scoring three runs for fewer is 19 by Cleveland in 1942 (Aug. 9-26 that season).

Jesus Aguilar’s two home runs — a two-run shot in Game 1 and a solo shot on Tuesday — resulted in three of Miami’s four runs scored on Saturday. A Joey Wendle RBI single that scored Luke Williams in the fifth inning of Game 2 accounted for the other run.

The Marlins used five pitchers in Game 2, with Tommy Nance (one run and six strikeouts over three innings) and A.J. Ladwig (four earned runs on six hits, including two home runs, over 3 1/3 innings in his MLB debut) responsible for most of the work. Huascar Brazoban (one earned run on two hits with four strikeouts in 1 2/3 innings), Anthony Bender (2/3 scoreless innings before leaving with an injury) and Dylan Floro (1/3 scoreless inning) rounded things out.