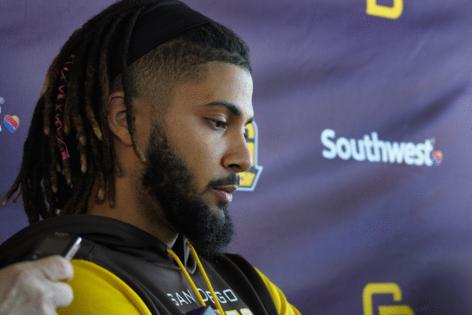 It’s one thing for a 23-year-old to make the irresponsible decision to climb on a motorcycle in the offseason and fracture a wrist when money, commercial close-ups and video-game covers are raining down with the ferocity of a spring thunderstorm.

It’s a completely and maddeningly other thing to deliver gut punches in rapid succession like a flyweight boxer — to the owner who invested 14 years and $340 million, to teammates grinding through in your absence, to a GM who went all-in with the biggest trade-deadline magic act ever, to fans and a city with patience tested like an MIT applicant — with an 80-game suspension for a positive performance-enhancing drug test announced Friday.

What will all of this will cost, beyond a dogpile of games crossing two seasons? For starters, massive damage to his own clubhouse and relationships with teammates. Few if any are likely to say that with a microphone in front of them, but it’s surely infuriating to work this hard to climb the mountain only to watch a climber affixed to the front of the rope mess around, get sloppy and send everyone else tumbling.

During Friday night’s game here with the Nationals, President of Baseball Operations A.J. Preller answered questions from a small group of media in a quiet tunnel outside the visiting clubhouse.

Preller’s demeanor or apparent blood pressure almost never changes, whether he’s discussing pickup basketball or the potential implosion of one of the biggest contracts in baseball history bearing his name in ink. He wielded words that proved beyond telling.

“I think what we need to get to, a point in time where we trust,” Preller said. “Over the course of the last, you know, six or seven months, I think that’s been something that we haven’t really been able to have there.”

Good for Preller. Instead of kid-gloving the situation, as the team seemingly did from the public’s perspective after the motorcycle mess, he chose more pointed and purposeful words.