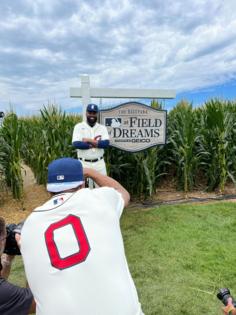 CHICAGO — It turns out you can stage a great infomercial for baseball, Iowa and Hollywood without the presence of the New York Yankees or a walk-off home run by Tim Anderson.

Field of Dreams 2.0 once again lived up to expectations, though expectations were considerably lower this year with the Chicago Cubs and Cincinnati Reds playing a game that had no bearing on the National League playoff race.

As a special TV event, the Fox telecast hit all the marks — plenty of stories about dads, videos of players shucking corn, a glowing full moon rising above the field and a sunset so Instagramable you’d think it was CGI.

And if you lived in Chicago and also were able to catch the postgame news conference on Marquee Sports Network, you were treated to someone asking the Cubs how an organization could be so “blessed” as to get invites to both the Field of Dreams game and next summer’s game in London against the St. Louis Cardinals. The Cubs marketing department couldn’t have scripted a question any better if they tried.

Watching the Field of Dreams game has become an annual tradition at my dad’s house, so I picked up a couple of Italian beefs with sweet peppers and juice on the side, and headed over to watch, hoping to get the father-son vibe that made the 1989 movie such a success.

Unfortunately my dad fell asleep before the Harry Caray hologram in the seventh, and I missed part of the game checking in on an episode of “24″ in which the ex-president takes nuclear secrets with him. Or maybe it was the news. It’s hard to remember with all the hoopla from Iowa.

The first thing you noticed about Field of Dreams 2.0 was there would be no Kevin Costner in the sequel, except for a brief narration of a video tribute to the late Ray Liotta, who played “Shoeless” Joe Jackson in the movie. Costner’s absence was never explained, and it didn’t really matter why he wasn’t there.

But since Costner was the star of the movie and made the inaugural game memorable by walking out of the cornfield to the theme music, his presence was sorely missed.

MLB instead gave us the father-son duo of the Griffeys. That was fine for the visuals, but didn’t pull the heartstrings like Costner returning to the site, looking exactly like his character, Ray Kinsella. You probably could put any visual to that music and pretend it’s a heartwarming moment, so give MLB some credit for not messing with the goods.

The Cubs scored three first-inning runs, but I lost my train of thought when Fox briefly cut away to a shot of a singular Cubs fan cheering in the stands. This was no ordinary Cubs fan. It was none other than Colin Faulkner, the Cubs executive vice-president of sales and marketing.