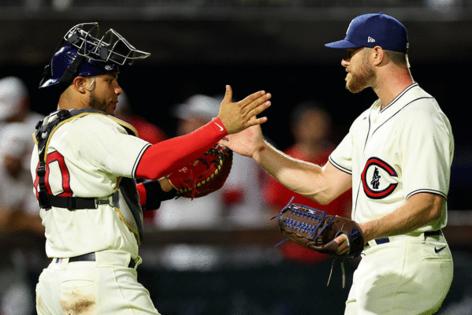 The Chicago Cubs left-hander wasn’t lined up to start Major League Baseball’s second game at the site of the classic 1989 movie until last week, when a rainout in St. Louis pushed back Smyly’s start by one day.

Smyly typically tries to arrive at the ballpark as late as possible so he doesn’t have too much time to let his mind wander. He prefers to review the game plan, get loose and go pitch. An abnormal game day schedule Thursday didn’t faze the veteran, however. The Cubs departed Wrigley Field at 10:30 a.m. Thursday, flew to Dubuque, Iowa, and then bused the remaining 25 miles to Dyersville. Smyly joined his teammates during their pregame walk through the cornfields to the 1989 movie set’s iconic field, taking it all in.

Smyly, backed by a three-run first inning, locked in to record a season-high nine strikeouts over five shutout innings in the Cubs’ 4-2 victory against the Cincinnati Reds on a picturesque night. Rowan Wick earned the save.

Smyly scattered four hits and walked two while lowering his ERA to 3.69 in 15 starts.

“A game that I’ll always look back and remember in my career, even though it’s just one regular-season game,” Smyly said Wednesday. “It’ll be special just to be part of that.”

Three consecutive run-scoring hits off Reds left-hander Nick Lodolo sparked the Cubs in the first behind Seiya Suzuki (double), Nico Hoerner (single) and Ian Happ (double). It took some pressure off Smyly and allowed him to more aggressively attack the Reds.

Willson Contreras appeared to be in significant pain after rolling his ankle after a hard turn around second base on Wisdom’s single to left field in the third. Contreras immediately buckled to the ground and was tagged out. But he was back behind the plate for the top of the fourth and played the rest of the game.

Nick Madrigal’s RBI single in the fourth extended the Cubs’ lead to 4-0. Madrigal recorded his first three-hit game since April and stole one base to match his season total.

A hologram of former Cubs announcer Harry Caray sang “Take Me Out to the Ballgame” during the seventh-inning stretch. The Reds followed with their first runs of the game, making it 4-2 on Matt Reynolds’ two-run double against reliever Michael Rucker.

This was the second Field of Dreams game in Dyersville. The Chicago White Sox beat the New York Yankees 9-8 in the inaugural event last August.