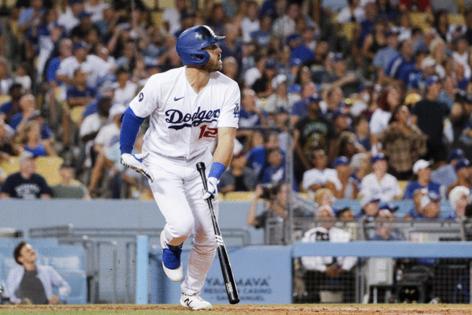 LOS ANGELES — Fans at Dodger Stadium were chanting Joey Gallo's name Wednesday night and they weren't putting an expletive before or after it.

That was a pleasant change from his two seasons in New York, where the two-time All-Star was so unproductive and was jeered so frequently that he holed up in his Manhattan apartment to avoid showing his face on the street and hearing about his shortcomings in no uncertain terms.

Gallo's teammates also chanted his name on Wednesday, and for many happy reasons. They were delighted not only with the pinch-hit, three-run home run that gave them a lead even Craig Kimbrel couldn't squander, but also with the sight of Gallo shaking off his anxiety as he circled the bases in the seventh inning of what became their 10th consecutive victory, an 8-5 win over the Minnesota Twins.

"I think the whole team breathed a sigh of relief right there for him," third baseman Max Muncy said after Gallo delivered his first home run and first runs batted in as a Dodger. "Hopefully, we can get him going more. He's a fun guy to watch when he's launching balls, so that was a good one."

Gallo, acquired from the Yankees last week for minor league pitcher Clayton Beeter, had three hits in his first 14 at-bats as a Dodger. Anemic as his .214 batting average was, it was better than the .159 batting average (with 106 strikeouts) he had in 233 at-bats with the Yankees.

The 28-year-old Nevada native didn't turn things around immediately. But on a team as deep as the Dodgers, there was no need for him to step up right away. He faced no pressure to carry a team that has won 10 straight games by multiple runs. "I haven't lost a game yet," he said almost in awe as he stood in front of his locker Wednesday night. "I thought we were winning a lot in New York. We're winning a lot here, especially lately."

He had the luxury and time to work on his swing as part of a plan to help him recapture the elements that contributed to his two 40-home run seasons for Texas. Best-case scenario, he would give some of the Dodgers' regulars a rest and provide occasional magic off the bench. If his struggles continued and the experiment didn't work, the Dodgers wouldn't have lost much.

His hard-hit double Tuesday and his home run Wednesday off a 97-mph fastball from Minnesota right-hander Griffin Jax on a 1-and-2 count are reasons to think Gallo might regain his confidence. And, the Dodgers might have gained a useful option as they assemble a roster that will allow them to follow a spectacularly successful regular season with a World Series championship.

"I think it's just the work that we've been doing with the hitting coaches," Gallo said of his success in their last two games. "Since the first day I got here, they said it's not about immediate results, just about the process and getting back to the player I know I can be. So it's been great. It's been relaxing. They're really smart. I'm excited to keep working with them."

He has made as many adjustments in his mind as in the batter's box.