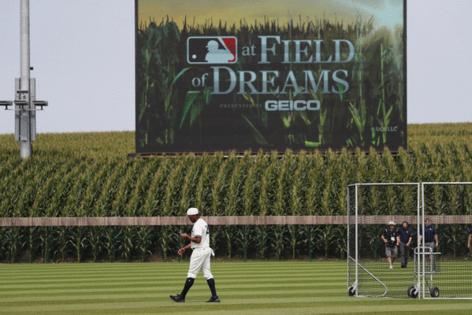 The inaugural Field of Dreams game between the Chicago White Sox and New York Yankees one year ago turned into an instant classic.

The TV presentation, the sight of “Field of Dreams” star Kevin Costner leading the players through the cornfield to the ballpark in Dyersville, Iowa, the sounds of crickets chirping and the game itself all lived up to the hype.

It’s probably unfair to judge Thursday’s Field of Dreams game between the Chicago Cubs and Cincinnati Reds against the success of last year’s, especially because both teams are well out of contention in the National League Central.

But every sequel inevitably gets compared with the original, and other than “The Godfather Part II” and perhaps a handful of others, it’s almost impossible to replicate something that worked to perfection.

The Cubs, naturally, are excited to be part of MLB’s biggest in-season event besides the All-Star Game, knowing they’re following in the footsteps of a classic.

“It’s a little part of history,” Cubs shortstop Nico Hoerner said Wednesday after homering in a 4-2 win over the Washington Nationals at Wrigley Field. “Eight thousand people is going to be small, but I feel like everyone there is going to be excited to be there. Just awesome all around.”

Tim Anderson’s walk-off home run capped the Sox’s 9-8 win over the Yankees in the inaugural game, which most thought would be a one-time event until the Cubs-Reds matchup was announced shortly afterward.

“I watched it last year,” Cubs third baseman Patrick Wisdom said. “I saw how special it was. And then when I saw that we were part of it this year, I was just super excited.

“And then to see my name on the (MLB) poster, it was really cool for me. Just honored to be a part of that. ... I know it’s going to be a long day but something I look forward to.”

Seiya Suzuki, who like many players hasn’t seen the 1989 film and was born after it was made, isn’t all that knowledgeable about its place in American movie lore. But he knows it’s a big deal to baseball and it puts the Cubs on a national stage again.