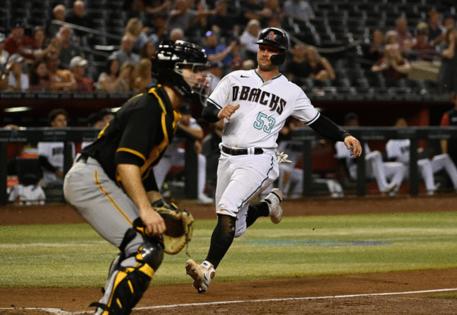 PHOENIX — The more pessimistic Pirates fans in Pittsburgh might argue the team phoned it in a while ago this season. Even if one doesn’t subscribe to that theory, the evidence in Wednesday night’s 6-4 loss to the Arizona Diamondbacks was a little on the nose.

In the top of the fourth inning, infielder Rodolfo Castro — just recalled to the majors before the game — walked on a full count to get to first, then became the star of one of the more ridiculous events of the 2022 campaign.

The next hitter, Oneil Cruz, blooped a single into left center and Castro booked it around second and dove safely, headfirst into third. Nothing too abnormal and a good bit of base-running. What caught social media by storm is during that entire stretch, Castro had an iPhone in his back left pocket. That became clear when he slid into third and the cellphone came tumbling out of his pocket.

Castro wasn’t immediately aware of the valuable possession he’d left on the base paths, but third base umpire Adam Hamari saw it right away. When he pointed it out, Castro picked it up and handed it to third base coach Mike Rabelo.

While that absurdity will be the most popular clip from the game, the actual, meaningful events that led to the Pirates’ loss were rather par for the course. Right-hander Zach Thompson started the game and looked slightly uncomfortable in more ways than one.

He allowed a leadoff double in the first, walked another, then gave up an RBI single to put the Pirates in an early 1-0 deficit. In the second, Thompson walked the first batter he saw then gave up a ground-rule double. In that span, Thompson started to feel something in his lower body, it appeared. The Pirates came out to check on him, but he stayed in the game and got out of that frame without a Diamondback crossing home.

In the third, Thompson wasn’t so lucky, with an RBI single from Seth Beer scoring another run. Really, though, Thompson hung in there through 4 2/3 innings. He certainly can’t be blamed for the overall listless performance from the Pirates as a whole.

Right-hander Duane Underwood Jr., who pitched an inning in the sixth and beginning of the seventh, incurred most of the damage, giving up five singles and a walk to usher in four runs.

And on offense, against rookie left-hander Tommy Henry, pitching in his second career game, the Pirates put together just four hits through seven innings. Two of those hits came from Cruz, and both came against a breaking ball from the Diamondbacks’ southpaw, signs of positive momentum in Cruz’s development at the plate. Only one ofcr the Pirates’ four hits against Henry, though, a sixth-inning solo homer from first baseman Michael Chavis, resulted in anything productive.

Chavis actually struck again in the eighth. After outfielder Ben Gamel drove in third baseman Ke’Bryan Hayes with an RBI double to the wall in right, Chavis unloaded on a pitch and drove his second homer of the night — and his 12th of the season — out to left. That made the game closer than it appeared all night, but it was too little, too late.

In any case, none of those hits were the ones that brought about the most notable part of the game. That honor belongs to Cruz and his fourth-inning single, though it really belongs to Castro and his iPhone.

One can only hope he paid for a warranty. As for the Pirates, they’ll have to wait to take another bite of the Apple on Wednesday.