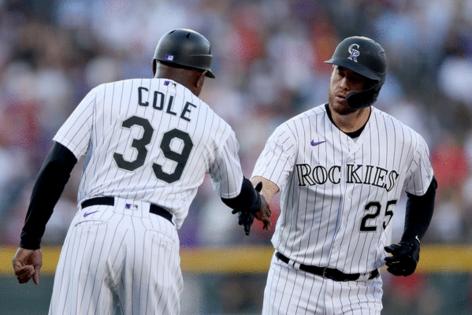 But the Cardinals faithful were swamped by Rockies tidal wave that included 22 hits, highlighted by a Rockies record, 495-foot home run to center by Ryan McMahon in the seventh inning. The Rockies beat the Cardinals 16-5.

Colorado has received a career-high, five-hit night from Randal Grichuk, the former Cardinal.

Colorado’s three-run first inning included an error by Arenado and a three-run homer by C.J. Cron, his 23rd homer of the season. Next came Colorado’s nine-run third inning, when they sent 12 batters to the plate and got a three-run blast from Grichuk.

The Rockies tacked on two more runs in the sixth and two more in the seventh when McMahon launched his two-run homer off left-hander T.J. McFarland into the second deck above the visitors’ bullpen. McMahon’s 495-foot homer is the longest by a Rockies player in the Statcast era (since 2015) and the fourth-longest ever in Coors Field history.

The Rockies’ hit parade included a three-run homer by C.J. Cron in the first inning and a big night from Brendan Rodgers, who tied his career-high with four hits, all singles.

Colorado rookie right-hander Ryan Feltner, back in the starting rotation because of the injury to Chad Kuhl, blanked the Cardinals for the first four innings, allowing just one hit. St. Louis eventually got to him, with Paul DeJong blasting a two-run homer to left in the fifth inning, followed up by a three-run sixth highlighted by an RBI double by Arenado and a two-run single by Andrew Knizer.

The Cardinals came to LoDo having won nine of their last 10 games and riding a seven-game winning streak. Starter Miles Mikolas carried a 2.92 ERA into Coors, but after he was torched for 10 runs on 14 hits in a mere 2 2/3 innings, his ERA rose to 3.50.