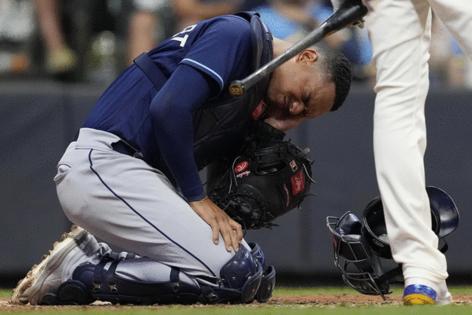 The result was a 5-3 loss to the Brewers that dropped the Rays’ record to 58-51 and leaves them needing a win in Wednesday’s matinee to avoid another series loss.

The Rays made a number of mistakes that cost them in different ways.

Opener Jimmy Yacabonis walked the leadoff man and made an errant throw to first leading to a run.

First baseman Ji-Man Choi cut off a throw home in the second that allowed Luis Urias to score when he looked to have been out.

Ryan Yarbrough threw a wild pitch (his second of the night) on a ball four, allowing ex-mate Willy Adames to go from first to third base in the fifth inning and score on a hard single from Andrew McCutchen.

Jose Siri laced a ball in the right-center-field gap that scored a run, but tried to stretch it to a triple and got burned testing the arm of ex-Ray Hunter Renfroe. He was thrown out, all but killing the rally.

Plus, David Peralta got robbed of a home run in the second on a spectacular leaping catch at the wall by center fielder Tyrone Taylor.

Diaz acknowledged on Sunday that he was scared about the potential for paranormal activity with the team staying at the historic and supposedly haunted Pfister Hotel.

That info made its way on the video board at American Family Field, which as he strode to the plate had a players trivia box that read: “Terrified of seeing a ghost at the Pfister Hotel.”

Diaz — who said before the game he had an encounter Monday, feeling someone touch him when he was sleeping — responded well in his second at-bat. And he snapped a career-worst 0-for-21 skid in the process, with a 421-foot blast, with an exit velocity of 106.7 mph, that briefly tied the score at 2 in the third.