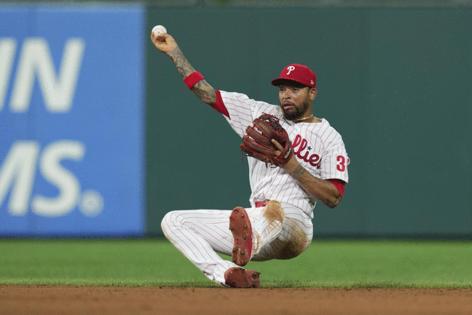 There wasn’t anything especially notable about it at the time, except that it was only Realmuto’s second home run in a 25-game span. Now, though, it’s clear that it marked the start of something — a six-week surge in which the star catcher has rediscovered his swing, reemerged as a dangerous middle-of-the-order hitter, and carried the hottest team in baseball to a hard-to-believe 23-13 record sans Harper.

Realmuto powered the Phillies to another victory — their 11th in 12 games — Tuesday night. Led by his RBI double in the first inning and leadoff homer in the fourth, they pushed past the Miami Marlins, 4-1, between the raindrops (also, 32- and 28-minute delays) in the opener of a three-game series.

Jean Segura tacked on a solo homer; Zack Wheeler provided six solid innings, and the bullpen picked up the last nine outs. But it was Realmuto, once again, who delivered the biggest hits and at the most opportune times, repeating a theme that has become common around here lately.

For the third straight game, Realmuto recorded multiple extra-base hits, including a home run. He’s only the fifth catcher since 1901 to go on such a streak, joining Tom Murphy in 2019, Gary Sánchez in 2016, Lance Parrish in 1978, and Randy Hundley in 1966.

But Realmuto has been scorching hot for longer than a handful of games. In fact, coincidentally or not, the pivot point in his season may well be traced to the 97-mph fastball that fractured Harper’s thumb.

But since then, beginning with his homer into the Western Metal Supply Co. building in left field at Petco Park in San Diego and including his homer against Marlins starter Braxton Garrett, Realmuto is slashing .347/.404/.703 with nine homers in 101 at-bats.

And just like that, those #BCIB — “Best Catcher In Baseball” — boasts from the Phillies’ social media accounts seem to be justifiable once again.