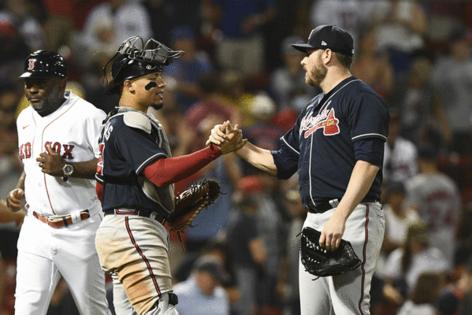 BOSTON — The Red Sox’ bullpen went unaddressed at the trade deadline last Tuesday. A week later, it cost them again.

On a day they lost one of their most important bullpen arms, closer Tanner Houck, to the injured list, the Red Sox’ lack of bullpen depth showed up late Tuesday night. Kaleb Ort, freshly called up from Triple-A Worcester, gave up a two-run single to Austin Riley in the 11th inning, which was the difference in a 9-7 loss to the Atlanta Braves at Fenway Park.

The shorthanded Red Sox fought valiantly, coming back from an early deficit to take a fifth-inning lead and sending the game to extras after falling behind in the eighth, but it wasn’t enough as they took their fifth loss in their last six games.

But without Houck, and having already burned Garrett Whitlock and John Schreiber, that’s who Alex Cora was forced to go with in a tied game in the 10th and 11th. After giving up a run in the 10th, Ort was asked to go an extra inning against the top of Atlanta’s lineup and lost it. With Ronald Acuna at second and Michael Harris at third, Riley’s sharp single left easily scored Harris before an aggressive send home of Acuna paid off, as the star outfielder made an incredible slide to evade Kevin Plawecki’s tag at the plate to give the Braves a two-run cushion, and ultimately the game.

In a back-and-forth game, the Red Sox took a 5-4 lead in the fifth when Jarren Duran – two days removed from an awful day in center field – earned a much-needed positive moment when he hit a go-ahead homer into the Red Sox bullpen. But the lead was short-lived.

Matt Barnes, in his third outing back, fell into some familiar habits after getting two quick outs. He walked Orlando Arcia, who then scored on Michael Harris’ go-ahead RBI double before he walked Acuna. Barnes couldn’t complete the inning as Alex Cora went to Hirokazu Sawamura, who struck out Dansby Swanson to end the inning.

Sawamura issued back-to-back two-out walks in the seventh, which forced Cora to go earlier than he wanted to John Schreiber to get out of the inning. Garrett Whitlock took the eighth but once again, after getting two outs, trouble followed. Acuna singled, and Swanson scored him on a double as the Braves retook the lead, 6-5.

The Red Sox responded in the bottom half of the inning, when Xander Bogaerts led it off with a double, then scored the game-tying run on J.D. Martinez’s single to center. The Red Sox had a chance to win it in the ninth when Tommy Pham hit a two-out double and Rafael Devers was intentionally walked, but Bogaerts flew out to center to send it to extras.

The Red Sox and Braves traded runs in the 10th. Atlanta went ahead on Arcia’s one-out double – in which he seemed to hurt himself rounding first before being tagged out at second – before Boston tied it on Martinez’s sac fly.