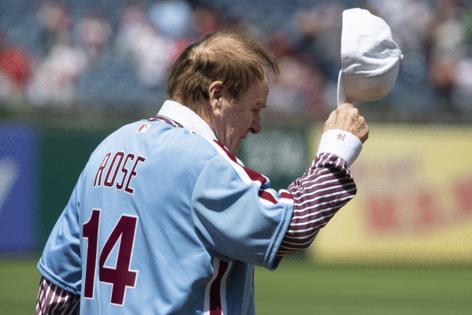 MLB’s all-time hits leader was at Citizens Bank Park on Sunday at the Phillies’ invitation to celebrate the team’s 1980 World Series championship. But his appearance in the booth alongside announcers Tom McCarthy and John Kruk got blue fast, as he tossed out locker-room language too obscene to repeat here.

Rose joined the booth in the bottom of the fifth inning and stayed through the end of the sixth. McCarthy did his best to account for Rose’s foul mouth, but the former All-Star’s repeated off-color comments regularly forced McCarthy to abruptly shift gears.

“You changed the subject real quick on that loop to right field,” Rose noted to McCarthy following some choice words.

But fans who watched a replay of the game on NBC Sports Philadelphia missed Rose’s comments entirely.

The network edited out the entire sixth inning, so fans watching the Washington Nationals bat in the top of the fifth inning were immediately shuffled to the top of the seventh, prefaced with the graphic, “Due to time constraints we now move ahead in the following program.”

Rose’s comments were obviously unusual, but NBC Sports Philadelphia normally edits down Phillies games — Sunday’s win ran 3 1/2 hours — to fit in a 2-hour running time for encore viewing. The fact that no runs were scored in the sixth inning made it easier to simply erase Rose’s appearance, according to a network source not authorized to speak publicly.

It remains unclear why producers at NBC Sports Philadelphia thought it was a good idea to allow Rose on the air, or why the Phillies thought it was a good idea to offer him to the media for questions. His remarks were a far cry from the informative analyst he appeared to be on Fox Sports from 2015 to 2017, when the network cut ties with Rose after allegations surfaced that he had a sexual relationship with an underage female in the 1970s.

It was a question about that relationship that set him off Sunday, telling a female reporter for The Philadelphia Inquirer he didn’t attend the celebration to answer questions about his past.

“I say this as someone who knows him, who he treated kindly, but the things he says and his lack of self-awareness are unreal,” Schilling wrote on Twitter. “HOF talent, absolutely, but just a bad bad guy with literally zero morals or scruples and not an ounce of couth”

The Phillies return to action Tuesday to begin a three-game series against the Florida Marlins at Citizens Bank Park, which will be televised at 7:05 p.m. on NBC Sports Philadelphia. Phillies ace Zack Wheeler is scheduled to take the mound against Marlins lefty Braxton Garrett.