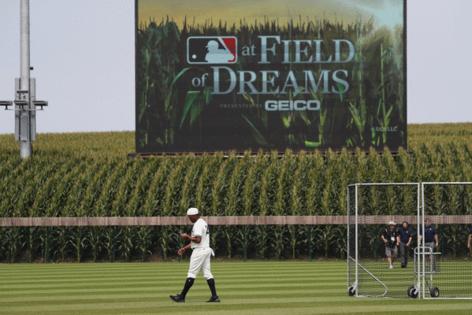 Here are four observations on Major League Baseball’s attempt to make it an annual classic:

1. Construction of the sportsbook annex to Wrigley Field remains on schedule.

What does that have to do with Thursday’s game?

The nationally televised game capitalizes on the 1989 movie “Field of Dreams,” adapted from W.P. Kinsella’s novel “Shoeless Joe,” which revolved around a farmer’s mystical meeting with the ghost of Shoeless Joe Jackson, the late Chicago White Sox star.

Jackson was banned from the game with seven Sox teammates for taking gamblers’ money to throw the 1919 World Series to the Reds. In the book and film, Jackson gets some personal redemption by playing with his fellow ghosts in a baseball field in Iowa cut out of a cornfield. His character, played by Ray Liotta, has the movie’s money line: “Is this heaven?”

The soon-to-be-completed DraftKings sportsbook at Wrigley is another money-making venture for the Ricketts family, which owns the Cubs. When the sportsbook opens in 2023, the Cubs will begin profiting off gamblers coming to their own field of dreams at Clark and Addison streets to legally bet on baseball and other sports.

It’s another example of MLB’s growing association with gambling and its partnership with DraftKings, the official sports betting partner of baseball.

Watching a game on MLB Network, a viewer gets not only the scores on the crawl at the bottom of the screen, but also the updated moneylines on each game. Every other commercial during a game seems to be an ad for a betting site. They’re almost as ubiquitous as the beer ads that dominated baseball telecasts the previous six decades.