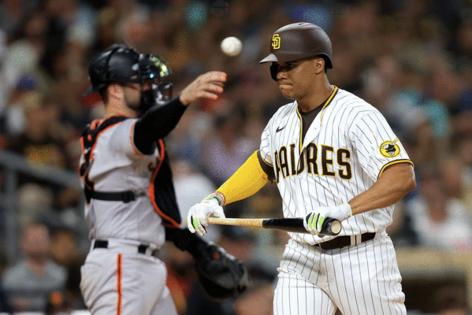 SAN DIEGO — The play ended in a chorus of boos, fans pelting objects onto the field and John Brebbia standing on the mound waiting to throw the next pitch. Somehow, some way, the red-bearded fellow was still preserving a lead.

For fans who have tuned in all season and might have forgotten: that is what stellar defense can do. It can change the tide of the game so quickly, so dramatically that it provokes visceral reactions from a sold-out ballpark.

The decibel level inside Petco Park hardly changed as the Monday night crowd of 40,686 shifted from raucously cheering Ha-Seong Kim’s game-tying double off Brebbia to vociferously jeering as crew chief Larry Vanover announced over the loudspeakers that Gabe Kapler’s highest-stakes challenge this season had been ruled successful.

The perfectly executed relay from Luis González, in the furthest reaches of the left-field corner, to shortstop Brandon Crawford and, finally, to catcher Joey Bart preserved one of Alex Wood’s strongest starts of the season and paved the way to a 1-0 win over the Padres in the opener of this three-game series.

“Looks like we won tonight’s game with some defense,” a smiling Kapler said afterward.

Bart laid the tag on Brandon Drury and immediately signaled toward the Giants' dugout to challenge the call when home plate umpire Sean Barber initially ruled Drury safe. Freeze frames in the replay — it was that close — showed Bart applying the tag as Drury’s hand hovered over home plate.

While Kapler said the Giants’ replay room showed Drury was “clearly” out, neither Crawford nor even Bart — the one confident enough to motion to the dugout to challenge the play — thought the safe call would be overturned.

“I thought it was going to be too close,” Bart said. “When I watched (Drury) round third, I didn’t think we had a play. But then I thought twice. Well, it’s Craw, he’ll throw a bullet in here, and that’s what he did.”

“As the play was developing, I didn’t think we’d have enough time,” Crawford said. “When I saw how far down the line he was, I didn’t have time to take an extra step or anything. I just threw it. Joey made one of the best picks and tags I think I’ve seen from a catcher.”

The play came on the first batter Brebbia faced after relieving Wood, who blanked the Padres for 6 1/3 innings in his fourth-longest start of the season.