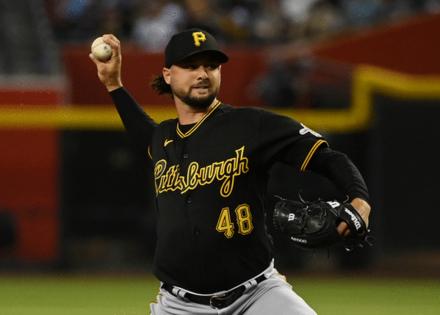 PHOENIX — Pirates manager Derek Shelton has professed patience with his roster this season. On multiple occasions, he’s stated the obvious: With a roster this young, there will be exciting moments of potential and frustrating moments of growing pains.

Monday’s 3-0 loss to the Arizona Diamondbacks would fit into the latter category. Though, to be fair, the rookies didn’t make all the mistakes.

Still, in such a close, low-scoring loss, individual plays are magnified, and the Pirates biffed too many of them.

In the bottom of the sixth inning, they essentially gave away the first run of the game. The first batter of the frame, Geraldo Perdomo, hit a seemingly routine grounder to third, but Michael Chavis, filling in at third base for Ke’Bryan Hayes for the game, couldn’t handle it. The ball bounced off Chavis’ glove and Perdomo reached easily.

During the next at-bat, Perdomo took off for second, attempting to steal. Pirates left-hander Manny Banuelos caught him in the act and threw over to first. But rookie Bligh Madris, playing first base, dropped the relay, and Perdomo freely scampered to second. Immediately afterward, Diamondbacks third baseman Josh Rojas bunted down the first base line. Madris fielded it, but nobody covered first and he couldn’t place a desperate tag on Rojas before he reached the bag. Perdomo advanced to third.

The next batter, Alek Thomas, hit into a double play, but Perdomo scored.

The Pirates then wasted a potential scoring opportunity in the top of the seventh. Center fielder Bryan Reynolds walked with one out, then outfielder Ben Gamel blooped a single into center, just outside the reach of a diving Thomas. It was a tough ball for Reynolds to read, as he wasn’t sure if it would elude Thomas, but when it did, he took off and tried to reach third. But Diamondbacks outfielder Daulton Varsho scooped up the ball and gunned Reynolds down at third. That inning ended on a Chavis groundout.

What will be most disappointing about all of that for the Pirates is the mistakes wasted an otherwise strong effort from their pitching staff. Right-hander Tyler Beede started the game, filling in as a sort of opener for the second time in the past week, and he was quite good.

Beede didn’t allow a hit through the first three innings, then came out for the fourth. A leadoff single was erased when the runner was caught stealing, though a two-out double from Christian Walker eventually chased Beede after 3 2/3 shutout frames.

Banuelos filled in from there, pitching two innings that should have been scoreless, as well, if not for the aforementioned defensive mistakes. Right-hander Yerry De Los Santos pitched 1 1/3 perfect frames himself before Yohan Ramirez experienced a bit of a blowup. He allowed a single, a walk, a bunt single, then a two-out, two-run base hit from Ketel Marte to allow the second and third runs of the game.

Outside of Ramirez’s flaws, that’s about all the Pirates could ask from their group in a bullpen game. The problem, beyond the mistakes, was the offense went gently into that good night. They accrued only three hits off Diamondbacks starter Zac Gallen, and all of them were singles. Gallen walked two others but struck out eight and pretty easily cut his way through seven innings of shutout ball.

In the eighth and ninth, Arizona called on Joe Mantiply and Ian Kennedy. All the Pirates could muster was a one-out walk from Tucupita Marcano in the ninth, but there was no real threat.

By that point, their situation seemed dire anyway. A quiet offense and defensive mistakes made for the kind of frustrating loss Shelton has warned about before.