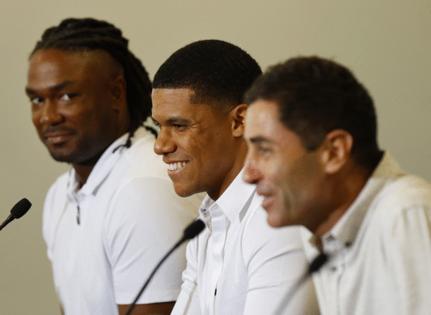 If fans groaned in exasperation as Dodgers pitchers continued to feed Padres lumber into a blue wood chipper, the overall narrative remained the same when the Padres rolled back down Interstate 5 and began a short homestand Monday against the San Francisco Giants.

The Padres (61-50 entering this week) almost certainly will notch their first winning full season under Preller and, cushioned by their massive, ever-growing payroll and a wild-card competition that's smaller than it may first appear, the Padres still clutch a ticket to their first playoff berth off a 162-game season since 2006.

Better than a consolation prize, the wild card once again provides the only option for the Padres and other NL West teams to cope with having the Dodgers in the same division.

The lone exception in the past 10 years — the 2021 Giants winning 107 games to edge the Dodgers — merely proved the rule.

If you don't believe me, listen to Preller say the quiet part out loud in December 2020.

"The reality is," he told ESPN, "the Padres are never going to be able to compete financially and roster-wise completely with the Dodgers," he said. "So what's your next best option? Let's do the best we can and if we get there, we can beat them in a seven-game series."

Doing the most he could last week, Preller improved a second-place club by adding arguably MLB's best offensive player in right fielder Soto, who's delivered steely plate appearances and mostly good defense in the five games; and perhaps the NL's best closer in Hader, who looked himself, which is to say, dominant, in his Padres debut.

So, while the Padres will have to raise their level of play to secure a playoff berth and beat any playoff team, keep in mind MLB's annual competition has become heavily backloaded. Five of the past eight Dodgers teams that won the West lost in the playoffs, a reminder that being the best team across six months doesn't confer much of an advantage in October.