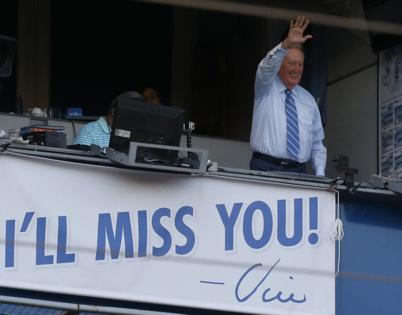 That was the first season after Harry Caray’s death, when the Cubs began asking guest performers to sing “Take Me Out to the Ballgame” in honor of the legendary broadcaster. The Cubs decided to keep the tradition after ‘98, and now every celebrity who comes to town with something to promote has been asked to sing at Wrigley, some on multiple occasions.

But Scully never did it again in his many return trips before his retirement in 2016. Before a game at Dodger Stadium once, I asked him why he declined the Cubs’ invitation.

“I did it once for Harry,” Scully replied. “If I did it twice, it would be doing it for me, and that wouldn’t be right.”

That was typical of Scully, a legend who never bought into the hype surrounding him.

Like Caray, Scully was bombarded by well-wishers wanting to thank him and tell him how much a part of their lives he was. At some point you’d think that constant ego massaging by fans would make his head swell, as I’ve seen happen to other broadcasters with far less talent.

If Scully ever really considered himself the greatest of all time, he never let on. He was sincere when he said upon retirement he would miss the fans more than they would miss him. Scully was truly a humble man with a great gift — the ability to spin a story while calling a baseball game and paint a picture that made you feel you were in the ballpark watching along with him.

Baseball has a lot of talkers in TV and radio booths these days. Some of them don’t know when to shut up. But there are relatively few painters, the ones who understand the broadcast is about the game and not themselves.

We’re fortunate to have one of them in Chicago in Cubs radio voice Pat Hughes, who continues to be at the top of his game at age 67, with no signs of slowing down. Cherish the painters while you can, because they’re not easily replaced.

Scully lasted 67 years in the business, a record that likely will never be topped. Was he was as smooth in his 80s as he was as a young buck with the Brooklyn Dodgers in the 1950s? Maybe not, but he was still the best in the business and a voice that will live on years from now, like Caray and a few other immortals.