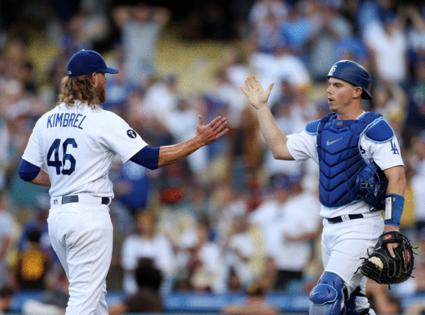 Freeman had just sent the eighth pitch he saw from Darvish in the third inning the other way for a run-scoring single. And Darvish in that moment had the look that said what every Padres player and everyone who roots for them is wondering.

What is it going to take to beat these guys?

They did not seem close to cracking the code Sunday, as the Dodgers completed a three-game sweep with a 4-0 victory at Dodger Stadium.

It was the Dodgers’ eighth win in 10 games against the Padres this season and 12th in the past 13 games the teams have played at Dodger Stadium.

Late Saturday night, manager Bob Melvin said, “We have to solve these guys at some point in time.”

The Padres have, for better or worse, nine regular-season games to try to do so.

The Padres, who have lost four straight games and fallen to sixth among the six National League playoff spots, trail the team with the best record in the major leagues by 14½ games in the NL West.

“They’re the dragon up the freeway that we’re trying to slay,” Padres Chairman Peter Seidler said during an in-game interview on ESPN, referring to the Dodgers, who have won 11 straight season series against his team.