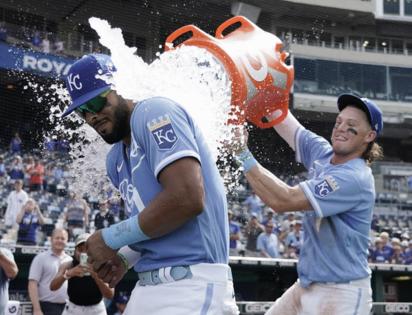 Amid the post-trade deadline infusion of youth, though, that record isn’t bogging down the trajectory of the season from here.

In fact, what the record implies is suddenly quite in contrast with the sum of their revitalized parts and collective identity right now.

Because no matter how the Royals fare the rest of the season, this a team shedding its skin and morphing into something else altogether: into the shape of promising things to come through these whiz kids, who heaped it on Sunday with a remarkably rookie-driven 13-5 blasting of the Red Sox, highlighted by MJ Melendez’s six runs batted in.

To be sure, growing pains await.

But the hotwired energy has been palpable in everything from Pratto’s exuberance Saturday to the reaction around him. It was unmistakable all through the game Sunday, too, but perhaps epitomized in Nate Eaton’s hustle … and even in the Vinnie Pasquantino-Nicky Lopez “Simba Cam” bit in the dugout:

While fans were cued to hoist up their little ones, a la the Lion King, Lopez was telling Pasquantino, “Grab me, grab me, pick me up.”

So Pasquantino placed his hands on the back of Lopez, who created an optical illusion by hoisting himself up on the railing.

Afterward, they giggled about it as they watched the replay on Pasquantino’s phone and talked about spending Sunday night doctoring the video up into some sort of meme or GIF.