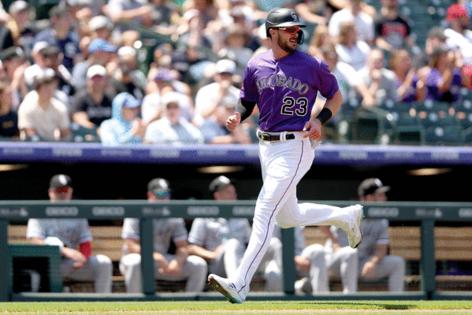 When the Rockies signed outfielder Kris Bryant to a seven-year, $182 million contract during spring training, owner Dick Monfort was giddy.

“This is a great day for us,” Monfort said. “Just so many things make this feel really, really right. We’re extremely excited to have Kris with us for the next seven years, and to help us win that elusive World Series that we are all looking for.”

Elusive is the key word in that statement.

With nearly two-thirds of the season in the books and the Rockies on pace for a 90-loss season, a World Series title seems like a pipe dream. Nonetheless, as the club stood still at last week’s trade deadline, general manager Bill Schmidt endorsed the direction of the team.

“I believe in the club,” he said. “We haven’t performed to our expectations, but we are continuing to grow in a lot of areas. And I think the future is bright.”

But given the lackluster performance of several of Colorado’s core players this season, as well as the financial straightjacket the club faces due to long-term contracts, Schmidt’s optimism must be tempered. While the Rockies remain winners at the box office, where they rank sixth in the majors in attendance (32,450), it’s difficult to see how the franchise is headed in the right direction.

They also traded outfielder Raimel Tapia to Toronto in exchange for outfielder Randal Grichuk, who will be on Colorado’s payroll for $9.5 million next season.

The result of all those signings? Mostly disappointment.

Bryant, plagued by lower-back issues early this season and currently on the injured list with plantar fasciitis of his left foot, has played just 42 games. When healthy, he’s delivered, hitting .306 with a .851 OPS, five home runs, and 12 doubles in 181 plate appearances. But he’s currently wearing a walking boot and there is no timetable for his return.