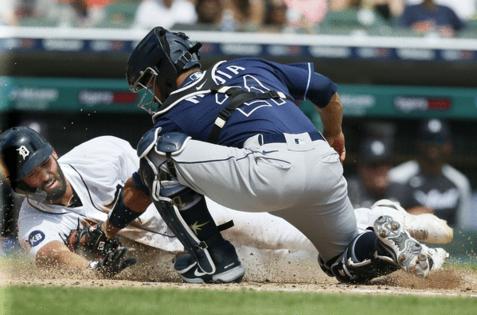 After getting two runners on in the top of the ninth, on a one-out Isaac Paredes single and two-out Francisco Mejia double, the Rays drew three consecutive walks from Tigers All-Star reliever Gregory Soto to score twice.

Jose Siri walked to load the bases. Yu Chang walked to force in the first run. Then Yandy Diaz, in an 0-for-20 skid, walked to make it 2-0.

They added on with run-scoring hits by Brandon Lowe, Randy Arozarena and Roman Quinn to score seven overall, their most prolific inning of the season.

The Rays had talked about making Sunday a bullpen game but seemed to back off that when they said Drew Rasmussen would make his start as scheduled. Turns out, they stuck to the original plan, limiting Rasmussen to three innings, during which he didn’t allow any hits, and then shuffling in six relievers.

The Rays improved to 58-50 and, by taking three of four from Detroit, won their first series in five since the All-Star break.

Rasmussen was quite sharp over his three innings, allowing no hits or walks while striking out two, throwing only 33 pitches. He retired his first eight hitters and faced the minimum nine as Akil Baddoo reached on an error by Paredes at second but was caught stealing by catcher Francisco Mejia.

The Rays didn’t get their first hit off Tigers starter Matt Manning until two outs in the fourth. Paredes singled and Luke Raley did the same, but Mejia popped out.

After making five errors in their last five games, the Rays played some better defense.

Chang, getting a start at shortstop, made a good grab and throw home with the infield in to nab Riley Greene in the fourth. Arozarena made a leaping catch at the leftfield wall to rob a likely home run by Harold Castro to end the fourth. First baseman Ji-Man Choi jumped to corral a high throw from third baseman Diaz and got his foot on the base to prevent — after a replay review — a single by Victor Reyes in the eighth.

The Rays are off Monday and then open a two-game series in Milwaukee on Tuesday.

A key deadline to keep hope alive for Oakland officials and the Athletics to reach agreement on a new Bay Area ballpark by year’s end has come and gone.

That could be good news for Southern Nevada as the A’s are still...Read More

The search is on for the next Chicago White Sox manager after Tony La Russa officially won’t return for the 2023 season.

“It has become obvious that the length of the treatment and recovery process for this second ...Read More

We have heard enough about how Aaron Judge is the only rightful candidate for the American League most valuable player award. He's not.

We also have heard enough about how Sandy Alcantara is the only rightful candidate ...Read More

The Tony La Russa 2.0 era is ending. So who will be the next Chicago White Sox manager?

It’s hard to speculate without knowing whether general manager Rick Hahn will return or if Chairman Jerry Reinsdorf once again will...Read More