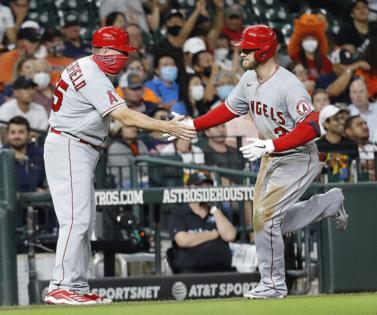 That streak was snapped, though. Flexen allowed five earned runs across six innings in Saturday night’s loss, tying his second most of the season. After Flexen exited, Brennan Bernardino gave up another two runs in the ninth. The Mariners lost 7-1, marking their largest margin of defeat to the Angels this year.

Flexen allowed a single from Magneuris Sierra and then a double from Taylor Ward to make it 1-0. He allowed Max Stassi to hit an RBI single to left field to make it 2-0. And he allowed Mickey Moniak to launch a homer in the fifth inning, and then watched David Fletcher homer in the sixth.

The Mariners left seven runners on base, too. Seattle is now 4-7 against the Angels this season and sits 12 games behind the division-leading Astros.

After a 2-1 win in the first game of Saturday’s doubleheader, the Mariners activated Mitch Haniger from the 60-day injured list. Haniger started in right field for the second game, his first game since April 29.

Haniger’s return wasn’t eventful, though, as he grounded out to the shortstop, earned one walk, and doubled to left field in his three at-bats.

The Mariners managed just one hit across the first four innings. Their bats were making contact, but only to routinely launch balls high into the sky that the Angels’ outfielders caught with ease.

T-Mobile Park came to life momentarily when catcher Luis Torrens hit his first home run of the year, but that excitement was quickly smashed when the Fletcher’s homer in the sixth put the game out of reach.

It looked like it could get even worse for Flexen when the next batter, Phil Gosselin, looked like he might add another. He shook his head in frustration as he watched his shot come up just short, with center fielder Sam Haggerty making the catch on the warning track.