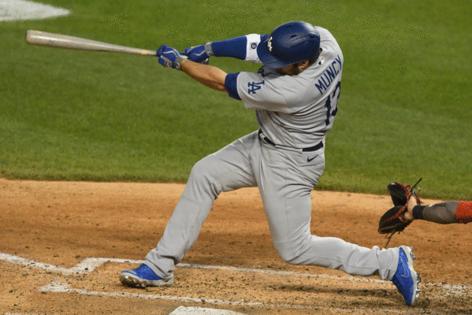 The second time, Clevinger survived one tenuous inning, limiting the Dodgers to one run again despite facing a two-on, one-out jam in the third.

By the time the Dodgers’ order turned over for a third time, the Padres had given Clevinger a one-run lead.

And though two more men had reached base in the fifth, the crafty right-hander was a strike away from getting out of the inning unscathed.

Instead — in a moment that captured why the Dodgers could be difficult for anyone, the Padres included, to knock out come October — Clevinger was punished for one last mistake.

He threw a slider to Muncy that was left right down the middle.

The Dodgers third baseman launched it to the Padres right-field bullpen.

The three-run home run propelled the Dodgers to a 8-3 win, clinching their third-straight series win over the Padres this year and giving them a chance to sweep their division rivals Sunday evening on national television.

And it came in a game with the same fraught tension reminiscent of fall postseason nights.