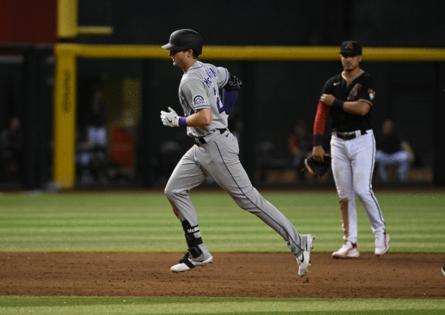 A season defined by struggles at the plate and problems in the field has taken a turn since the start of August, with Saturday night the latest chapter for the team’s starting third baseman.

One night after blowing a three-run lead, the Rockies evened their series with the Arizona Diamondbacks after McMahon delivered a clutch ninth-inning home run for a 3-2 victory Saturday at Chase Field.

Down 1-2 in the count to D-backs reliever Ian Kennedy, McMahon drove a chest-high 94-mph fastball 421 feet into the seats in left-center field. The late-game heroics followed three straight two-hit games at San Diego for McMahon, who didn’t get an at-bat Friday.

The 27-year-old is now hitting .444 (8 for 18) with two homers early on in August, performing like the player the Rockies signed to a six-year, $70 million extension prior to the season.

Closer Daniel Bard made quick work of the D-backs in the bottom of the inning, retiring the side for his 23rd save in 25 opportunities this season.

While the former was steady over seven innings on the mound, the latter smashed his first major league home run as part of his second consecutive multi-hit game.

Senzatela benefitted from a pair of double plays from his infield, as he scattered nine hits with two strikeouts and zero walks. Reliever Carlos Estevez got the win after pitching a scoreless eighth inning prior to McMahon’s jack.

Montero’s homer came with the Rockies trailing 2-1 in the top of the eighth inning, with the rookie jumping all over starter Merrill Kelly’s 2-1 pitch and sending it screaming over the left-field fence.

Kelly, who held the Rockies scoreless for five innings before giving up runs in the sixth and seventh, was chased after Brian Serven singled one batter later. Colorado went on to put runners on first and second with one out, but D-backs reliever Joe Mantiply was saved when second baseman Ketel Marte stretched to snare a Brendan Rodgers line drive, then turned and fired a throw to second to double up Serven.

Randal Grichuk followed up Friday night’s three-hit night with an RBI single that tied the game at 1-all in the top of the sixth.

Arizona’s Daulton Varsho answered with a solo home run off Senzatela in the bottom half of the sixth, giving the D-backs their second lead of the night, 2-1. But Montero and McMahon’s shots soon followed, and the Rockies set up a rubber match Sunday at Chase Field to decide the three-game series.

The Tony La Russa 2.0 era is ending. So who will be the next Chicago White Sox manager?

It’s hard to speculate without knowing whether general manager Rick Hahn will return or if Chairman Jerry Reinsdorf once again will...Read More