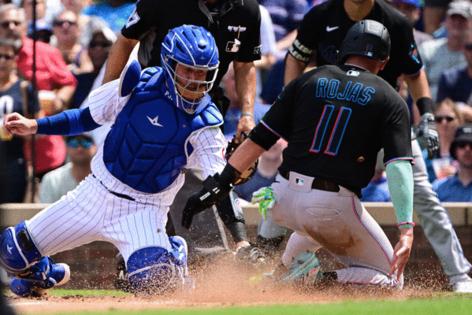 CHICAGO — It was another dud of a performance by the Miami Marlins offense. They had no answer for Drew Smyly or Mark Leiter Jr. in a 4-0 loss to the Chicago Cubs on Saturday at Wrigley Field, Miami’s seventh loss in the past eight games.

A few quick hits from the outing:

The Marlins’ only real scoring chance on Saturday came in the third inning. Bryan De La Cruz hit a two-out single to right field — his second hit of the game — that appeared to score Miguel Rojas from second in the third inning. The play was overturned after a replay review.

— Pablo Lopez, in his first start following the trade deadline, allowed four runs on nine hits and was pulled after giving up a leadoff home run to P.J. Higgins in the sixth inning. He struck out six and walked two.

Lopez was steady through the first four innings, giving up just one run on a Nico Hoerner single to left that scored Ian Happ, who hit a double to left that Peyton Burdick dove for only to have the ball pop out of his glove.

Things unraveled for Lopez in the fifth, with the Cubs sending seven hitters to the plate and scoring two runs. Christopher Morel, Rafael Ortega and Willson Contreras opened the frame with consecutive singles, with Contreras driving in Morel. Seiya Suzuki then grounded into a double play that scored Ortega from third. Happ and Hoerner then hit back-to-back two-out singles to put runners on the corners again before Lopez struck out Frank Schwindel to end the frame.

— An individual highlight: Burdick recorded his first career MLB hit with a single to left field in the third inning.

Leblanc is hitting .391 (9 for 23) with three doubles and a home run in that stretch and has three multi-hit outings.