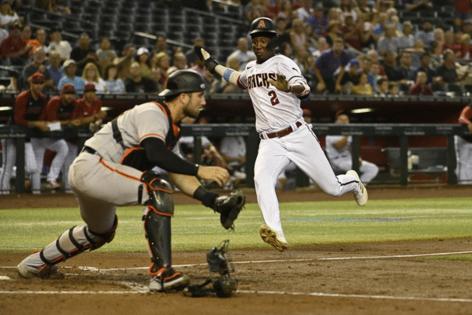 Elehuris Montero made a statement and German Marquez resembled a vintage Marquez.

And, oh yes, Randal Grichuk, who’s finally starting to heat up, went 3-for-4 and hit his 11th homer of the season.

But it was all for naught. Because, after all, these are the 2022 Rockies.

The Colorado Rockies blew a three-run lead late in the game and lost 6-5 to the Arizona Diamondbacks on Friday night at Chase Field.

“This was a tough one, right?” manager Bud Black told reporters in Phoenix.

Colorado’s seemingly cushy lead evaporated in the seventh with lefty Colome on the mound.

Lucas Gilbreath has become one of manager Bud Black’s most-trusted relievers, for good reason. Since May 30, he had allowed a run just three times over his last 27 appearances. That was good for a 1.33 ERA, the lowest among lefty pitchers during that span.

But Gilbreath was simply bad Friday night. He issued two walks and gave up a two-run double to Josh Rojas as Arizona cut the lead to 5-4. When Gilbreath walked Alex Thomas, Black gave him the hook. Of the 22 pitches Gilbreath threw, 17 were out of the strike zone.

Right-hander Robert Stephenson came in to strike out Ketel Marte and get Christian Walker to ground out to first, preserving Colorado’s lead.

The Rockies want to see what they have in Montero, so they are playing the rookie corner infielder as often as possible. They’re liking what they’re seeing.

Montero doubled and scored a run off veteran left-hander Madison Bumgarner in the third inning on Jose Iglesias’ double. His two-run double off Bumgarner in the sixth scored Yonathan Daza and Connor Joe to give the Rockies a 5-2 lead.

Marquez’s night began on shaky ground. He needed 34 pitches to get through a first inning that included a leadoff walk to Rojas, a balk that advanced Rojas to second and an RBI double by Ketel Marte.

Marquez also served up a leadoff homer to Daulton Varsho in the fourth, but all in all, it was a gritty, effective start. He pitched six innings, allowing two runs on four hits, with three walks and three strikeouts. Early in the game, he unleashed two fastballs that were clocked at 100 mph.

There’s no question that it’s been a disappointing season for Marquez, but he’s pitched well recently. He’s 2-2 with a 3.13 ERA over his last five starts, limiting opponents to a .220 average with three homers over those five games.