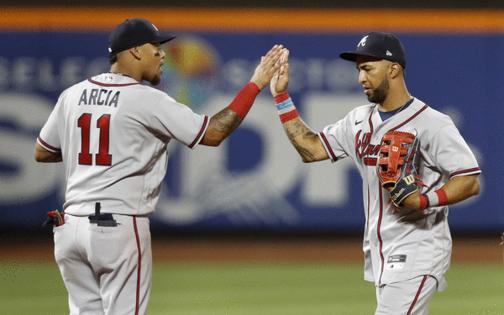 NEW YORK — As the Mets try to figure out how their new pieces fit and what it all means for their eventual World Series chances, they should try to remember that going down 8-0 in the second inning is not conducive to winning.

Taijuan Walker couldn’t get out of the second inning in the Mets’ 9-6 loss to the Braves on Friday night. His eight earned runs stick out like a sore thumb, but failing to get a single whiff on his four-seam fastball or splitter (his two most-used pitches of the season) is really what did him in. When Walker was pulled with nobody out and runners on the corners in the top of the second inning, he sauntered off the mound knowing he had just turned in his worst performance as a Met. The 33-pitch first inning will likely spin around in his brain like clothes in a washing machine. At least he can say he didn’t walk anybody.

The eight earned runs were the most Walker had allowed since April 10, 2015, when he was still a Seattle Mariner. Atlanta batters reached base in all kinds of ways, combining singles, doubles, home runs and even a hit-by-pitch to hang the crooked numbers. Eddie Rosario hit a two-run homer in the first to put his team up by four, then Michael Harris II creamed a solo shot to lead off the second. The Braves followed that up with three straight singles, and when Trevor Williams couldn’t strand any of his inherited runners, the Mets faced an extreme uphill battle before many fans had even gotten through the vicious stadium traffic.

In a heartening display of resiliency and morale, neither the Mets nor their devotees showed any quit. The 8-0 eyesore on the Citi Field scoreboard quickly went away when Brandon Nimmo laced an RBI single in the bottom of the second. Unfortunately, Luis Guillorme was thrown out at home trying to give the Mets a second run, killing a potential fire-starting rally.

Later on in the fifth inning, the crowd fully embraced the possibility of an improbable win. Sensing that their team has played well all year and had plenty of time to mount a comeback — or maybe it was just Friday night overconfidence — the Flushing faithful nearly willed it into existence. The Mets finally got to Atlanta starter Ian Anderson, sending him packing on Jeff McNeil’s run-scoring single. The Braves then brought in a lefty, which meant Darin Ruf could finally get a chance to hit, and he stroked a two-run double in his first plate appearance as a Met.

The pinch-hit fortune continued when Eduardo Escobar batted for Guillorme and grounded one into left field, allowing Ruf to score his first run as a Met. Before they could get the tying run to the plate, though, Tomas Nido flew out to right to squash the rally. Losing this game was definitely not the hitters’ fault. The Mets finished with 12 hits and worked five walks, providing the type of crowded base paths that typically lead to better things. But again, falling behind by eight in the game’s first half hour put them in a nearly impossible situation.

Friday night was the first time since June 28 that the Mets allowed nine runs in a game. The fact that Atlanta’s run total only got to nine is because of the Mets bullpen. Asked to get 24 outs in relief of Walker, Trevor Williams, Joely Rodriguez, Mychal Givens and Tommy Hunter did so while only allowing one run. Hunter, logging his second inning of work, gave up a gopher ball to Atlanta catcher William Contreras at the very end.

The slight silver lining is, with a doubleheader coming on Saturday, Buck Showalter did not have to use any of his high-leverage relievers. Edwin Diaz, Adam Ottavino, Seth Lugo and Trevor May are all fresh for the upcoming double dip. Playing two games in the same day will also let the team showcase its newly-acquired depth, with the platoon partners probably splitting the starter’s duties.

Sometimes a wakeup call is needed. Even though the Mets can feel okay about the non-Walker performances on Friday, and the fact that they never rolled over and died, a loss to a division rival that feels out of hand in the second inning is both slightly demoralizing and uncharacteristic of this team.

If they get an outing characteristic of Max Scherzer on Saturday, this will all be swiftly forgotten.