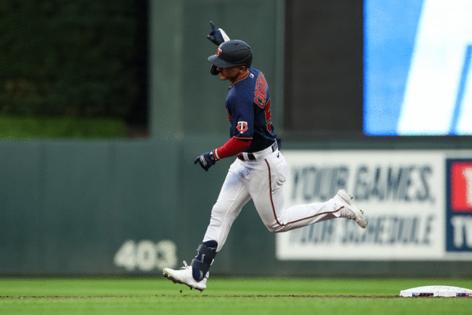 MINNEAPOLIS — The Twins won the game Friday. Though it might be more appropriate to say Toronto lost it.

After squandering a 5-0 lead, the Twins came back for a walk-off 6-5 victory in the 10th inning, engineered mostly from a costly Blue Jays mistake.

Jake Cave struck out but reached first base when Toronto catcher Danny Jansen botched the throw to first. That also gave Nick Gordon — the runner who started extra innings on second base — a chance to scamper to third.

Tim Beckham put the ball in play on the next at-bat, grounding the ball to third, but Gordon beat that tag at home to score the winning run.

The win came in front of 29,593 fans — a good chunk of them rooting for Toronto — at Target Field. The Twins improved to 56-50 to maintain their slim lead on the American League Central. Toronto dropped to 59-47 for second place in the AL East.

The Twins were able to force their former starter Jose Berrios from the game after just 3 2/3 innings. Berrios gave up a solo home run to Mark Contreras in the third inning to make the game 1-0 but really combusted in the fourth.

A Twins starter hadn't complete six innings in nearly two weeks. Tyler Mahle — someone who has already thrown nine innings once this season — changed that in his first start since his trade from Cincinnati. Though he might have hoped in hindsight he'd ended at five.

With a five-run lead, Mahle allowed his first homer of the evening in the fifth inning, a solo shot to Matt Chapman. In the sixth he gave up another solo home run to Santiago Espinal. Whit Merrifield proceeded to nab a base hit off him before Vladimir Guerrero Jr., drove a two-run homer to make it 5-4.

The Twins bullpen — which had a terrible night in the first game of the series Friday that led to the Twins designating longtime pitcher Tyler Duffey for assignment — had its ups and downs Friday. Griffin Jax struck out the side in his seventh inning. Jhoan Duran put away his first two batters but then gave up a pair of base hits to the top of Toronto's order. And Jorge Lopez was a strike away from his final out when Raimel Tapia smacked the game-tying RBI single.

Gio Urshela pinch hit to leadoff the bottom of the ninth and delivered a single. Gilberto Celestino then pinch ran for him and performed some acrobatics to avoid running into Luis Arraez' groundout on his way to second. Correa benefited from Toronto second baseman Cavan Biggio bobbling the ball to put runners on first and third.

Reliever Yimi Garcia intentionally walked Polanco to load the bases and struck out Miranda. Nick Gordon then flew out to force extra innings.

Michael Fulmer struck out his first hitter in the 10th but then had the bases loaded from a walk and a base hit. But he returned to strikeout form, retiring his final two batters to give the Twins another chance at a walk-off.