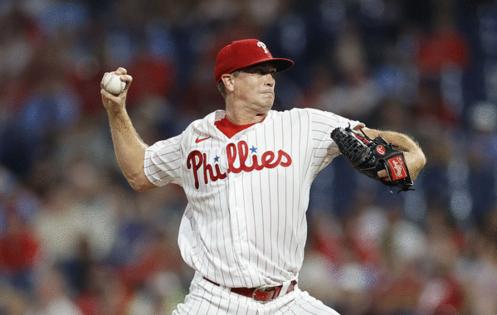 PHILADELPHIA — Kyle Gibson stepped on the mound Friday night at Citizens Bank Park, nine days since his last outing, one day after coming off the bereavement list, and delivered one of the best starts of his 10-year career in the Phillies’ 7-2 wiin over the Washington Nationals.

The veteran right-hander carried a perfect game into the seventh inning before leadoff batter Victor Robles reached base by being hit by a pitch. The next batter, Luis Garcia, took away a possible no-hitter with a single. When the inning had finished and Gibson’s night was done, he had held the Nationals to two hits and one run in eight innings, with four strikeouts and two hit batsmen in 105 pitches.

Gibson worked quietly and quickly. Initially, he was overshadowed by the Phillies’ titanic offense, which put up four runs in the first inning, and tacked on two more in the third, all on home runs by Rhys Hoskins, Nick Castellanos and Darick Hall. But as the game went deeper into the night, fans started to catch on to what was happening. In the sixth inning, Ildemaro Vargas hit a liner down the third-base line towards Alec Bohm. It looked like it would be a sure base hit, but Bohm made a diving catch. As he ran off the field, visibly energized by the play, he pointed toward Gibson as if to say, “I’ve got you.”

The crowd went berserk. And when Garcia hit that single, the crowd gave Gibson a hearty round of applause. As he walked off the field after the top of the eighth inning, he received a standing ovation.

Brad Hand came in for the ninth and allowed one hit, one earned run and one walk, but ultimately got the three outs he needed to secure the Phillies’ 58th win of the season.

Nationals starter Josiah Gray took the mound on Friday with a 1.50 ERA in two starts against the Phillies this season. By the time he exited in the fifth inning, that number had ballooned to 4.50 over three starts.

The Phillies set a tone early. In the end of the first inning, they hit three home runs and a triple to take a comfortable 4-0 lead. That lead grew to 6-0 in the third inning on a two-run homer by J.T. Realmuto hit another two-run home run, the Phillies’ fourth homer of the night.

Kyle Schwarber piled on the home run bandwagon with his 34th of the year, a 419-foot moonshot to center field. It was the Phillies’ first five-homer game since June 30 against Atlanta.

Castellanos hit a two-run home run to left field in the bottom of the first inning that left his bat at 108.6 mph. It was Castellanos’ second home run in his past three games and one of three hard-hit balls by the right fielder on Friday night. Castellanos is hitting .346/.370/.615 over his last seven games, but more importantly, is starting to flash some power.

Hoskins is also heating up, and so is Realmuto

They say that hitting comes in waves, and luckily for the Phillies, they have multiple hitters who are hitting hot streaks at the same time. In addition to Castellanos, Hoskins and Realmuto are also tearing the cover off of the ball. Realmuto was a double short of hitting for the cycle on Friday night (as if this game needed to flirt with history any more), and Hoskins had a solo home run for his second straight game. Hoskins is hitting .375/.464/.750 over his last seven games, and Realmuto is batting .333/.407/.708 over that span.