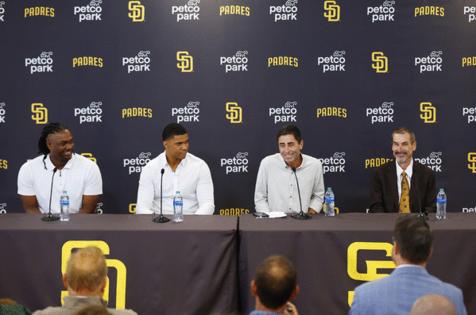 LOS ANGELES — To say acquiring Juan Soto (and Josh Bell, Josh Hader and Brandon Drury) took things to a new level for the Padres is like saying the traffic leaving Dodger Stadium can back up.

There is almost no way to quantify how big it is. Or might be.

Padres President of Baseball Operations A.J. Preller "won" the trade deadline in 2020 and the offseason in 2021. The former delivered, the latter disappointed.

And now this, a surreal two days in which one of MLB's perennial also-rans made five trades that netted four major league players that include arguably the game's best position player and best relief pitcher.

"We have the team to compete," Manny Machado said. "And definitely A.J. and his staff, they went out there and they went for it. That gives players confidence in knowing that you go out there and perform every single day and try to reach a goal. You can talk about it, but I think it's a reality here. I think this is the right group. I know we've made moves in the past, but definitely this seems like it's been the right ones."

It's practically unfathomable to think the improvements won't help secure the franchise's sixth playoff appearance in 54 years — and first following a 162-game season since 2006.

Manager Bob Melvin was asked Wednesday night if expectations had changed for the Padres.

He let out something between a chuckle and a sigh.

"Yes," he said as he closed his eyes and bowed his head.